on developing better habits which are intentional and mindful

219 Followers
This channel appears in
inspiration, 💭, how to do my job, become empty of mindless distraction, ✶ spiritual realm, 📖 Wisdom, toolbox, soft reminders, ooo6575856435, building and sustaining a creative practice , res:// The Self, Becoming, sagacious, Commonplace book, mind, Great Are.na Channels, care package, spells 🌀, Thank You Index for the Are.na Annual, on writing > techniques, advice..., ou gin l'esprit, thoughts to entertain , ⚙️ life resource well, realizing the realization, All the bottles of wine in my room were gifts from your floor, reading, the self / other selves , how to not go insane, CHANNELS, UX, an authentic meal of yourself, telly, self gardening, finding a lil place in the ecosystem , On living, To Build A Home Within Myself, Thoughts, making time, collecting , Positivity, Creative Process, and stories from a tearoom window
View
Grid
Table

“dreaming as an artistic intervention”

“dreaming as a collective practice”

“what are the boundaries of the medium I'm working with and how can i tear those down to rebuild (into something new)?”

“Careful artistic practice may be one way to begin bridging the gap between the magical and the normal.”

Where are the Competent Romantics? - Zo…

Dying as the last stage of growth, Mwal… 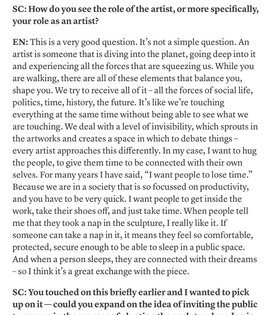 Keshav Anand via Something Curated 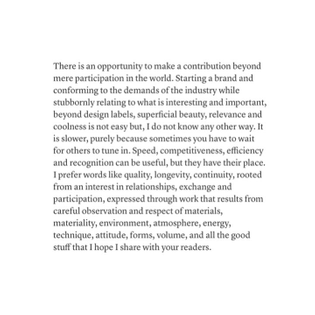 Peter Mabeo via Something Curated

“Limit everything to the essential but do not remove the poetry.”

— Dieter Rams, quoted in Less and More: The Design Ethos of Dieter Rams 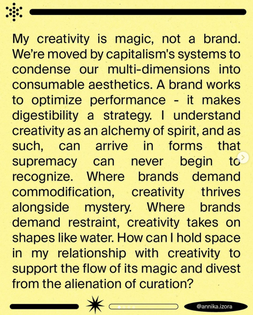 My creativity is magic, not a brand, Vi…

"Music writing that is not restricted by the demands, wishes, and timelines of the music industry. Writing, not advertising. Love, not a battle of the brands."

"I wouldn’t be able to tiptoe around the perimeter of my destiny much longer if I wanted to remain eligible for it. I’d have to participate, and not just by listening and consuming music, which without other modes of participation feels almost parasitic. I’m not a spectator, I’d have to act.  If I was going to be in it I would have to be backstage, to see its guts. Watching from the outside felt like coaxing myself into the blur of a lie and it made me restless."