“You’re not a monster,” I said. But I lied. What I really wanted to say was that a monster is not such a terrible thing to be. From the Latin root monstrum, a divine messenger of catastrophe, then adapted by the Old French to mean an animal of myriad origins: centaur, griffin, satyr. To be a monster is to be a hybrid signal, a lighthouse: both shelter and warning at once.

Describing true love, Eric Butterworth writes: “True love is a peculiar kind of insight through which we see the wholeness which the person is – at the same time totally accepting the level on which he now expresses himself – without any delusion that the potential is a present reality. 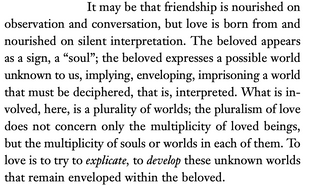 Gilles Deleuze (from Proust and Signs)

“There are so many crushes in a lifetime, so many friendships that mix desiring-to-have with wanting-to-be. It’s the combination of wants that makes these longings confusing, dangerous, and queer. There is a desire to know that is already knowing, a curiosity for what you deep down recognize, a lust for what you are or could be. Writer Richard Lawson describes it as “the muddied confusion over whether you want to be someone’s companion or if you want to step inside their skin, to inhabit the world as they do.” 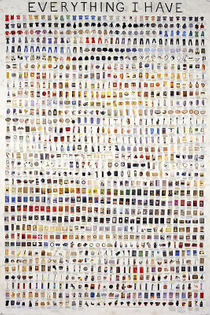 To open ourselves to the joy of a loving union means accepting the possibility (inevitability) of loss. To be able to love, we need to accept the melancholy of life, the little losses of every day and the great loss called death. Paradoxically, once we except that change, loss, discomfort, and grief are inevitable, life is not so frightening and we are freer to create intimate relationships. 

“Truthfully, this is the fabric of all my fantasies: love shown not by a kiss or a wild look or a careful hand but by a willingness for research. I don’t dream of someone who understands me immediately, who seems to have known me my entire life, who says, I know me too. I want someone keen to learn my own strange organization, amazed at what’s revealed; someone who asks, and then what, and then what?

From The Giant’s House, Elizabeth McCracken

When you sit for an hour and a half in front of somebody, he or she shows about twenty faces. And so it’s this crazy chase of, Which face? Which one is the one?