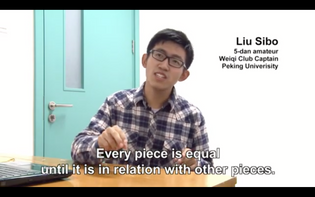 As the pressure of collapsing cosmology affected me [as Zea Mexican was dying], so my writing hand began to seize up. Instead of being the curlew which writes, it becomes a fist, becomes like stone.… That is why I was fortunate eventually to discover the computer. Instead of being able to have a fist and create the sculpture of the word, I could use a little finger and tap those keys, and miracles would happen on the screen electronically.

Of disputed but ancient origin, [“Abracadabra”] was originally intended to cure a person of fever and was used both in written and oral forms. When written, it was worn as a protective amulet. Its form was triangular: the complete word being written on the top line, the last letter dropped on the next line and, in turn, on subsequent lines until all that remained at the point was the initial A. When recited, the entire word was first pronounced, and then the ever-decreasing fragments, until only the vowel remained. In either case, the patient’s fever was supposed to diminish progressively until the first letter—the letter of good health—remained. 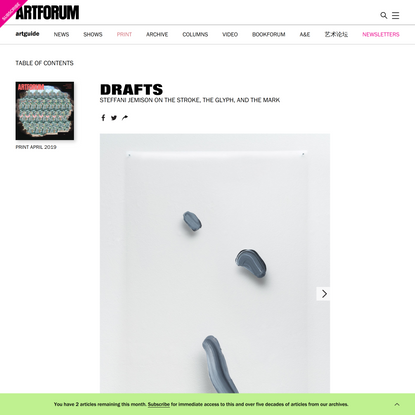 STEFFANI JEMISON ON THE STROKE, THE GLY… 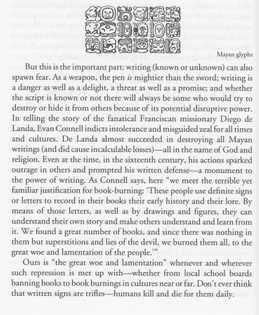 (It is interesting to note that the borrower of a writing system often improves upon or simplifies the original, being unencumbered by the forces of tradition.) What is queer typography? 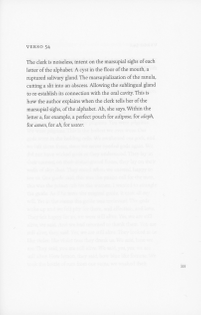 “‘O-hee-ye-sa!’ called my father, and I obeyed the call. ‘It is time for you to go to school, my son,’ he said, with his usual air of decision. We had spoken of the matter more than once, yet it seemed hard when it came to the actual undertaking. I remember quite well how I felt as I stood there with eyes fixed upon the ground. ‘And what am I to do at the school?’ I asked finally, with much embarrassment. ‘You will be taught the language of the white man, and also how to count your money and tell the prices of your horses and of your furs. The white teacher will first teach you the signs by which you can make out the words on their books. They call them A, B, C, and so forth. Old as I am, I have learned some of them.’ As Ohiyesa rode his pony to the boarding school for the first time, he encountered two Indian school boys and they raced their ponies to the mission school. Eastman told of this event of first entering the white man's school. ‘By this time we had reached the second crossing on whose bank stood the little mission school. Thirty or forty Indian children stood about, curiously watching the newcomer [me] as we came up the steep bank. I realized for the first time that I was an object of curiosity, and it was not a pleasant feeling. On the other hand, I was considerably interested in the strange appearance of these school-children … The hair of all the boys was cut short, and, in spite of the evidence of great effort to keep it down, it stood erect like porcupine quills. I thought, as I stood on one side and took a careful observation of the motley gathering … When the teacher spoke to me, I had not the slightest idea what he meant, so I did not trouble myself to make any demonstration for fear of giving offense … He then gave some unintelligible directions, and, to my great surprise, the pupils in turn held their books open and talked the talk of a strange people. Afterward the teacher made some curious signs upon a blackboard on the wall, and seemed to ask the children to read them. To me they did not compare in interest with my bird’s-track and fish-fin studies on the sands. I was something like a wild cub caught overnight, and appearing in the corral next morning with the lambs. I had seen nothing thus far to prove to me the good of civilization.”