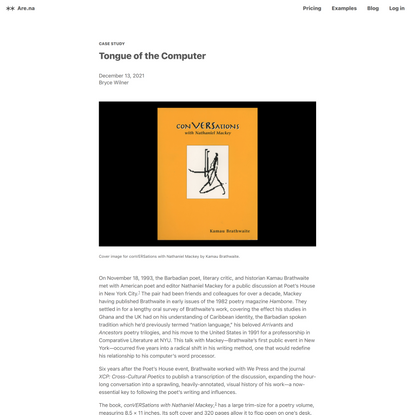 Tongue of the Computer — Are.na

The really beautiful thing is that the language of Caliban is the best language in The Tempest. Better than all the white talking because he says things like, “Be not afraid. The Isle is full of noises.”… I don’t think it is Prospero who makes Caliban talk beautifully. I think Caliban is instinctually a tribal poet. That’s what he has in him. So Prospero can’t make him a poet. He may teach him another language, but I think Shakespeare proves that by making Caliban talk so beautifully … it would be poetry. I think there’s a lot of misunderstanding in presenting the simplicity of Caliban savage, Prospero professor. 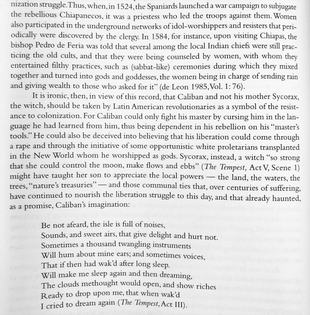 Would Caliban’s conspiracy have had a different outcome had its protagonists been women? Had the instigators been not Caliban but his mother, Sycorax, the powerful Algerian witch that Shakespeare hides in the play’s background, and not Trinculo and Stephano but the sisters of the witch who, in the same years of the Conquest, were being burned in Europe at the stake?

The question is a rhetorical one, but it serves to question the nature of the sexual division of labor in the colonies, and of the bonds that could be established there between European, indigenous, and African women by virtue of a common experience of sexual discrimination. 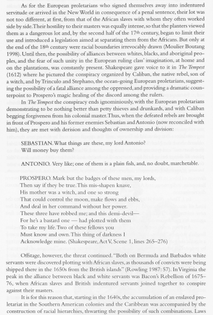 Prospero, or rather Unprospero: slave-owning planter;
Ariel, the go-between, sometimes mistaken for Aerial (the press, mass media), usually an educated slave or freedman open to “white” creolization and technology;
Caliban, the black/slave rebel, trying, from cultural impulse, to return to or
align himself with his submerged/maroon ancestral heritage as represented by
Sycorax, his mother, in whom resides the quality of soul grit or kernel, known as nam.

But by 1831–32, despite their differences, Prospero, Ariel and Caliban were all Creoles: that is, they had a lifestyle that was tropical, slave/colonial and dependent on/independent of the metropole. But to be “creole” didn’t completely mean or imply satisfaction, stabilization or completion of a process quite the opposite, in fact. To be creole in the changing world of the early nineteenth century was to be in a state of constant bias (from/towards) the ancestral cultures. Prospero wanted to be more white again. Caliban wished to assert, more comprehensively than his equipment allowed, his negritude. (Ariel produced/picked up/transmitted the various vibrations). But because of metropolitan actions and precautions—and the history of their own local development—neither Prospero nor Caliban could return to the imagined idyll. 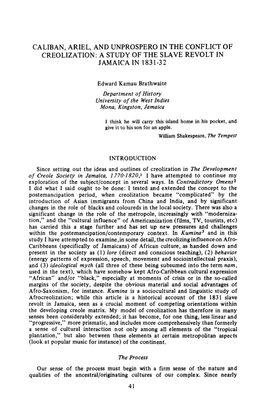 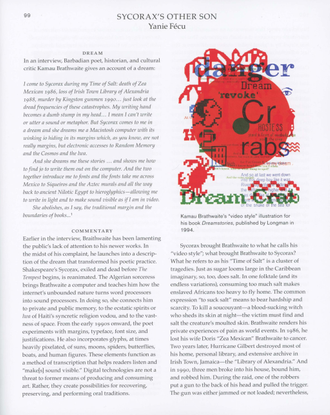 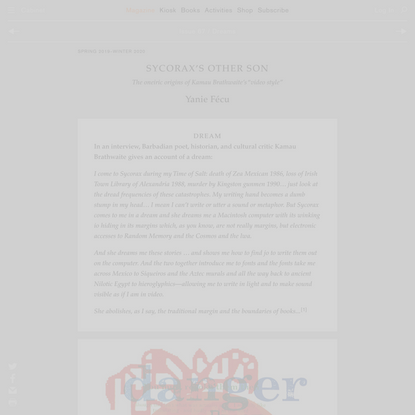