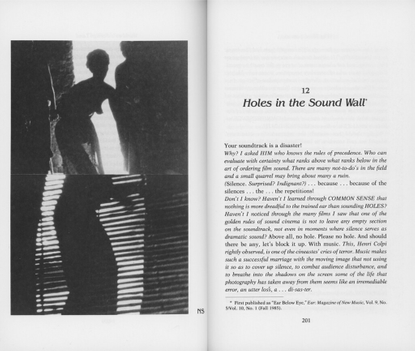 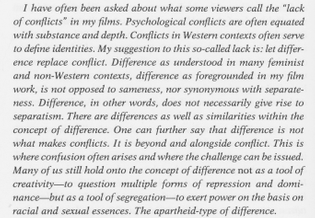 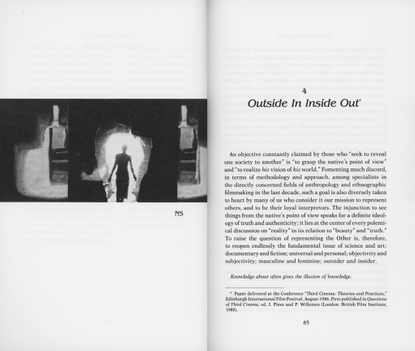 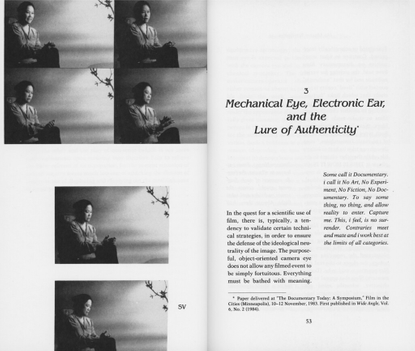 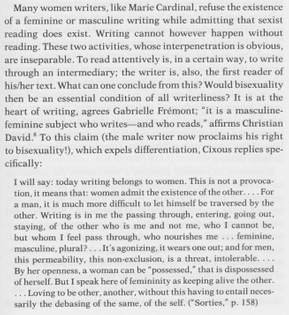 For I know I do not learn anything when I am told what to learn; I learn when the learning comes as much from myself as a viewer as from the film I see. Reading a film is a creative act and I will continue to make films whose reading I may provoke and initiate but do not control. A film is like a page of paper I offer the viewer. I am responsible for what is within the boundary of the paper but I do not control and to not wish to control its folding. The viewer can fold it horizontally, obliquely, vertically; they can weave the elements to their liking and background.

There is no such thing as documentary—whether the term designates a category of material, a genre, an approach, or a set of techniques. This assertion—as old and as fundamental as the antagonism between names and reality—needs incessantly to be restated despite the very visible existence of a documentary tradition. In film, such a tradition, far from undergoing a crisis today, is likely to fortify itself through its very recurrence of declines and rebirths. The narratives that attempt to unify/purify its practices by positing evolution and continuity from one period to the next are numerous indeed, relying heavily on traditional historicist concepts of periodization.

Truth and meaning: the two are likely to be equated with one another. Yet, what is put forth as truth is often nothing more than a meaning. And what persists between the meaning of something and its truth is the interval, a break without which meaning would be fixed and truth congealed. This is perhaps why it is so difficult to talk about it, the interval. About the cinema. About. The words will not ring true. Not true, for, what is one to do with films which set out to determine truth from falsity while the visibility of this truth lies precisely in the fact that it is false? How is one to cope with a “film theory” that can never theorize “about” film, but only with concepts that film raises in relation to concepts of other practices?