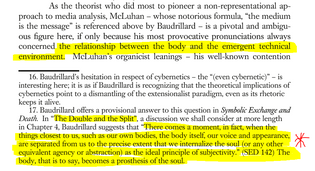 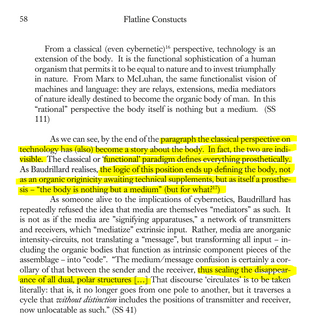 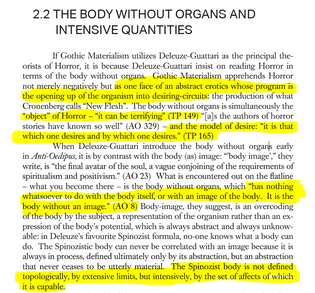 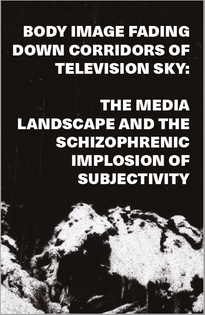 "In Libidinal Economy and Duchamp’s Transformers. 97, Lyotard suggests ways in which such body horror might be a realist description of late capitalism. Bodies under capitalism are not “alienated”, he insists, but machined, transformed, mutated; something Jameson recognises in his discussion of Cronenberg’s Videodrome in The Geopolitical Aesthetic. But Jameson, hung up on Adorno’s dialecto-melancholy, is far too quick there when he argues that the “[c]orporeal revulsion” arising from Videodrome’s “grotesquely sexual nightmare images, in which males are feminized by the insertion of organic [sic] cassettes (if not revolvers) into a newly opened dripping slot below the breast bone […] probably has the primary function of expressing fears about activity and passivity in the complexities of late capitalism, and is only secondarily invested with the level of gender itself […]” (30-31) By implying that“feminization” must always be equated with pacification, itself a second-order effect of “late capitalism”, Jameson begs all the questions Videodrome poses in its positing of a convergent fate for sex, technology, and capital." 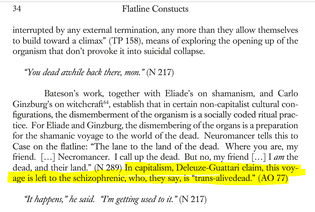 "Jameson’s definition of “late capitalism”, derived from Mandel, depends upon an identification of just this “production of machines by machines”. Jameson quotes Mandel on “the three general revolutions engendered by the capitalist mode of production since the ‘original’ industrial revolution of the late eighteenth century”: “Machine production of steam-driven motors since 1848; machine production of electric and combustion motors since the 90s of the 19th century; machine production of electronic and nuclear-powered apparatuses since the 40s of the 20th century.” (PCLLC 35) ...Processing this perception in advance of Jameson, Deleuze-Guattari’s cybernetic realism inherits and supplements Marx’s Gothic vocabulary. Citing Marx, they refer to capitalism as “a post-mortem despotism, the despot become anus and vampire: ‘Capital is dead labour, that vampire-like, only lives by sucking living labour, and lives the more, the more labour it sucks’” (AO 228) and also as “the thing, the unnamable, the generalized decoding of all flows” (AO 153)."

"The third-order simulacra are the information processing systems of late capitalism which “no longer constitute either transcendence or projection”; they are models which are “themselves an anticipation of the real, and thus leave no room for any kind of fictional anticipation.” (SS 122) If Baudrillard’s theory-fictions of the three orders of simulacra must be taken seriously, which means: as realism about the hyperreal, or cybernetic realism”39, it is because they have realised that, in capitalism, fiction is no longer merely representational but has invaded the Real to the point of constituting it. Any theory which thinks it can unmask the fictions of Capital belongs to the second order simulacra – the nineteenth century phase of industrial capitalism – that was anyway always eluding it.40"

"The order of simulacra as Baudrillard presents it makes the same differentiation between mechanical, thermodynamic and cybernetic machines, expressed initially as the distinction between the automaton (which, for Baudrillard, is understood as a purely mechanical being) and the robot (which is an industrial creature). “A world separates these two beings […] The automaton plays the man of the court, the socialite, it takes part in the social and theatrical drama of pre-Revolutionary France. As for the robot, as its name implies, it works; end of the theatre, beginning of human mechanics. The automaton is the analgon of man and remains responsive to him (even playing draughts with him!) The machine is the equivalent of man, appropriating him to itself in the unity of a functional process. This sums up the difference between first and second- order simulacra.” (SED 52)"