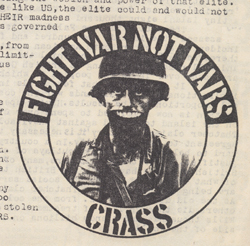 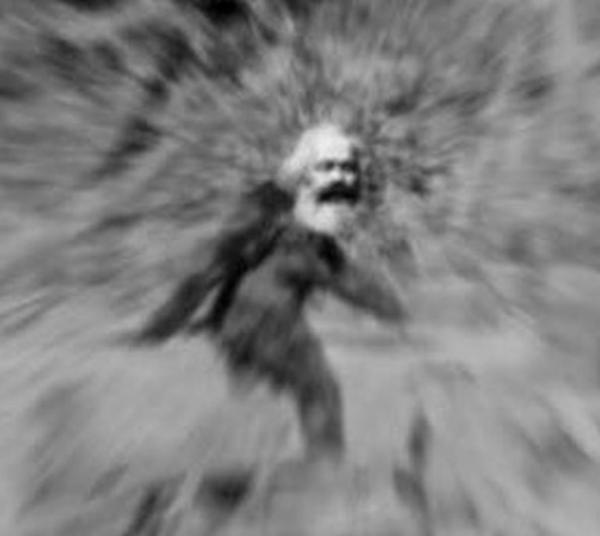 d50lhl_xsaa9dvn.jpg
to utopia or hell
by Xac Branch
31 blocks • about 7 hours ago 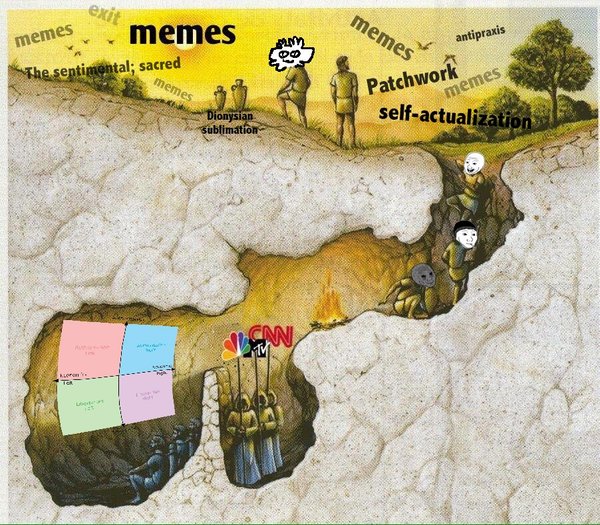 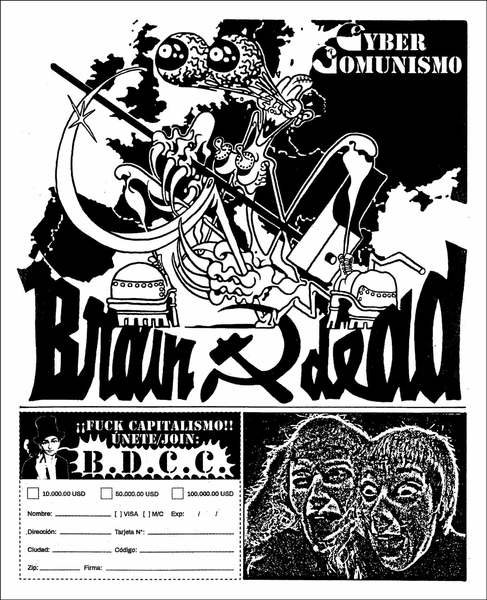 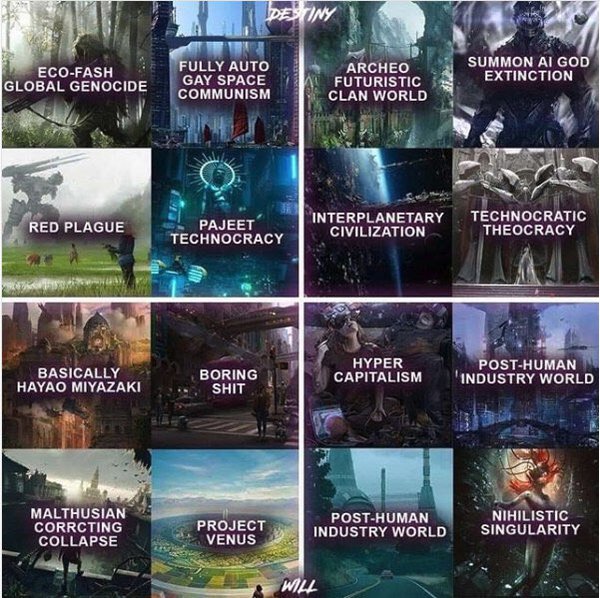 I think people have the wrong view of what communism is. To place communism in a difference context than the one with which we are familiar, consider that communism is simply 100% unemployment, in which your wages can buy nothing because the money is worthless, you own nothing and democracy itself is a trivial shell game without any sovereign popular content at all.

Is this not closer to the actual trajectory of society already evident to even the dullest simpleton? There is a commonly held fallacy that communism involves involves a negation of the present trajectory of capitalist society. This is not true. Communism is catastrophe for present society and that catastrophe is inevitable. All that is necessary for this catastrophe to materialize is that we do exactly what we are doing right now — nothing.

It is likely our consciousness will undergo a radical revision only when we find it actually impossible to sell our labor power and only when, even if we sell it, our wages can buy nothing.

Is this the preferred way to realize communism? Probably not, but wage slaves are not in the position to experiment with utopian visions of the future. They have to feed their kids. So they likely will keep selling their labor power until this becomes impossible. Confronted by this new situation, they will improvise: communism!

Endnotes would likely object, perhaps by invoking one of their favorite lines (slightly restated, in their version) from Marx: “Communism is not an idea or a slogan. It is the real movement of history, the movement which — in the rupture — gropes its way out of history.” We can sit around all day talking about the future we want, but we don’t get to choose how capitalism ends. In a memorable essay about logistics, Jasper Bernes takes aim at the techno-optimists who believe we can seize “the globally distributed factory” system and do with it what we wish.1 Bernes argues instead that many forms of economic organization wouldn’t make sense under socialism. He takes logistics — rearranging supply chains and transport costs — as his example. The complex logistical innovations that keep Walmart’s shelves stocked are designed not to maximize productivity but to leverage the competition between different low-wage national economies. “Without those differentials” — presumably abolished under socialism — “most supply-chains would become both wasteful and unnecessary.” Revolutionaries cannot simply take over and “reconfigure” the supply chains; they can only obstruct them — blockading ports, blowing up warehouses, sabotaging trucks. This may sound like anarchist fantasy, but for Bernes and Endnotes these tactics follow from the strictest realism. The questions they ask are not easily dismissed.

some large percentage of the means of production for consumer goods were ready to hand, and one could locate, in one’s own region, shoe factories and textile mills and steel refineries. A brief assessment of the workplaces in one’s immediate environs should convince most of us — in the US at least, and I suspect most of Europe — of the utter unworkability of the reconfiguration thesis. . . . Most of these jobs pertain to use-values that would be rendered non-uses by revolution. To meet their own needs and the needs of others, these proletarians would have to engage in the production of food and other necessaries, the capacity for which does not exist in most countries.

Bernes writes quite reasonably, for example, that it is “politically non-workable” to expect that “15 percent or so of workers whose activities would still be useful [after the revolution] would work on behalf of others.” But he believes, with the Endnotes collective, that communism is somehow workable. It is as if someone has given you a dazzling lecture on the dangers of drinking coffee before offering you a line of coke.

According to Endnotes, the shape of the new struggles was determined by the ongoing decomposition of the working class into heterogeneous fractions. None of these fractions could plausibly present itself as representative of the common interest, as industrial workers had done. Rather, stagnant growth rates and regimes of austerity had sharpened the conflict between different kinds of proletarians. Pensioners and unemployed youth, “native” citizens and immigrants, public employees and nonunionized workers, all found themselves competing for shares in a shrinking pie. What they had in common — the need to earn a living — made them rivals, even enemies.

Understanding the Endnotes position on race and gender requires grappling with the particular meaning they assign to the words capital and capitalism. For most Marxists, the working class is the protagonist of history. For Endnotes, the subject of recent history is capital. This is somewhat strange, since capital is not a person or a group of people with intentions or goals. Rather, capital here is a shorthand for the whole web of social relations among people living in capitalist societies. These social relations, viewed across historical time, have a distinct pattern of motion, whose course no individual could consciously choose or hope to master. The result of this motion has been the displacement of labor from production and the emergence of surplus populations.

Everything is about capitalism, but class is nothing special. This is the distinctive Endnotes position on the perennial conflict between identity politics and Marxism. Another way of putting it is that capitalism is a real universal, but only in the negative sense. What can billions of people, different from one another in every way, have in common besides the fact that they all need to work for a living? The upshot, for Endnotes, is that we should no longer speak about class consciousness but “consciousness of capital” — an awareness that all our fates are shaped by a single system, even though its pressures, rather than crystallizing resistance, push to break things apart.

By contrast, Endnotes denies that the cultural construction of class identity can ever cut sharply enough to alter the long-term course of history. The figure of “the worker,” though constructed by activists, was powerful because the reality of factory production came close enough to the myth to make it plausible. All of it was undone when the factories closed. In fact, the workers’ movement, by promoting economic “growth” and becoming a partner in production, actually helped hasten the maturity of capitalist production and, with it, its own irrelevance. Class, in the final instance, is a dependent variable dragged behind the independent motion of capital. Even the most adept organic intellectuals could never bend history in a new direction; they could only mark time until objective necessity entered a new phase, one that no longer required workers or their identities.

If the techno-utopian, accelerationist Marxism can resemble Silicon Valley dreams of pure automation, Endnotes’s Marxism bears traces of survivalist pessimism. As the laws of capitalist development take their course, we’re told, more and more people will own nothing but their labor, and find that their labor is worth nothing. Having no alternative, some of them will discover ways to “destroy the link between finding work and surviving.” Jacques Camatte, a founder of communization theory and inspiration to Endnotes, eventually became a leading anarcho-primitivist. Endnotes disavows this later Camatte, but given their insistence that communism dispense with markets and states (not to mention other capitalist mediations such as “nation [and] species”), it’s unclear what the editors think would prevent a collapse in living standards. They concede that it is “entirely possible to imagine that hating one another, and ensuring that no one gets slightly better than anyone else, will take precedence over making the revolution.” This is a staggering understatement. It’s hard to imagine global economic decline unchecked by large-scale political institutions leading to anything but Hobbesian disaster. What needs justification is the hope that Endnotes retains: that the revolution is still possible, even if “the actual means of reconnecting individuals to their capacities, outside the market and the state, are impossible to foresee.”

Endnotes unapologetically narrates the fortunes of the working class as the rise and fall of the industrial worker. Back then, labor was “engaged in building a modern world.” Today’s workers, however, are “employed in dead-end service jobs” and “see no purpose in their work.” But “service” is a broad category. Growing numbers of health-care workers, largely women and nonwhite, suffer from exploitation and may hate their jobs with good reason. But the purpose of care work is easier to identify with, and harder for society to dispense with, than working retail. However communism turns out, people will continue to be born, get sick, and die; if for no other reason than this, many existing kinds of work will continue to be socially necessary. Why couldn’t this kind of labor be affirmed the way industrial development once was? Couldn’t it ground a program that demanded universal guarantees of health and human services alongside the abolition of differential racial and gendered responsibility for the care of others?