From our perspective here in 2025, it all seems inevitable. But maybe it wasn’t.
When Adobe released the desktop publishing software PageMaker 6.0 in 1995, it started monitoring and collecting its users’ activity online. In one of the many black-and-white booklets inside its colourful box, it is still possible to read in the fine print that ‘data related to the customers’ use of our software will be collected to improve our products’.

After just three years, the company had to build a large compound in the outskirts of Ottawa to store all the information being gathered. By the time Adobe Creative Suite was released in 2003, more than 180 engineers were working exclusively in managing, categorising and processing all the data generated by programs such as Photoshop, Illustrator, InDesign, Acrobat, Premiere Pro, Dreamweaver and After Effects. But this task was consuming too many human resources and was not cost-effective.

As automated tasks ‘to optimise workflow’ became popular among designers – the number of people working in data processing was cut to a third and replaced by bots. These bots could categorise and archive all the data generated by the software packages’ users – mainly graphic designers. On an almost global scale, they were able to produce detailed reports on habits, processes, steps taken, recurrent detours, variations and the final product. When Adobe bought the online portfolio-showcasing platform Behance in 2012, the aim of tracking every designer’s activity was made evident, although disguised as just a ‘boost to empower creativity’ and launch their next product, Adobe Creative Cloud. But the goal was not to empower designers, but to automate profit. The Creative Data Library was ready to be explored. Soon there was no alternative for anyone needing to design but to pay for a subscription. Software had effectively flattened tools, process and output into an inevitable standardisation. The global homogenisation of graphic design and visual culture was a key political conquest to further push consumer control and its respective monetisation. 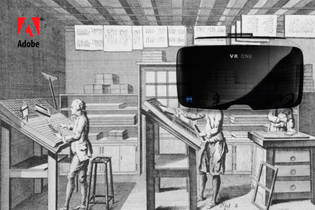