‎
Strike 1969 Pamphlet
c. 3/15/69
The TWLF answered the question: why should students stick their neck out for the cause? 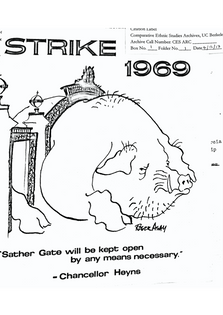 ;ether Gate will be kept open by any means necessary.' - Chancellor Heyns 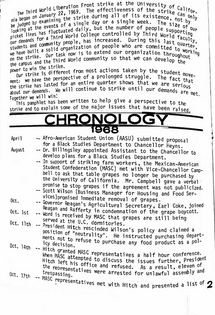 World Libereli9g Frer4t effectiveness Umnfivtrsity Of Ca 'n"I' 22ihe strike during all of its existence, cat srvienn'tasaof a single dlotrhma single week. Thse% Pour demands seqZsrodrldd daily, 'Co ege numberbafriTaPdllias engethis ltick stud creinunTopme9o,p1,ezhhamsn minfcpreemamsTde.mhoDurami on we th:skturilke.a ruts task nor/ is to extend our organizationtl ng the camas and the Third World community so that we can develop the power to win the strike. et Our strike is different from most actions taken by the student Together we will win: meet: we have the perspective of a prolonged struggle. ae The about our demands. We will continue to strike until our d the strike has lasted for an entire arter shows that we re fen; serious re fact ,,,at te mandstare net This pophlet has been written to help give a perspective ta the strike and to explain some of the major issues that have been raised ...CidaQpaiaiww,CCI9aa'''
Afro-American Student Union (AASU) submitted proposal for a Black Studies Department to Chancellor Heyns. August -- Dr. Billingsley appointed Assistant to the Chancellor to develop plans for a Black Studies Department. -- In support of striking farm workers, the Mexican-American Student Confederation (MASC) met with Vice-Chancellor Camp bell to ask that table grapes no longer be purchased by the University of California. Mr. Campbell gave a verbal promise to stop grapes if the agreement was not publicized. -- Scott Wilson (Business Manager for Housing and Food Se, vices)premised immediate removal of grapes. Oct. -- Governor Reagan's Agricultural Secretary, Earl Coke, joined Oct. 1st Reagan and Rafferty in condemnation of the grape boycott. -- Wore is received by MASC that grapes are still being Oct served at the U.C. dormitories. Ilth PresIdent Hitch rescinded Wilson's policy and claimed a position of "neutrality". He instructed purchasing depart-Tents not to refuse to purchase any food product as a pol-icy decision. Oct. 14th - Hitch granted MASC representatives a half hour conference. When MASC attempted to discuss the issues further, President Hitch left his office and refused. As a result, eleven of the representatives were arrested for unlawful assentlY and Oct 17th trespassinIyPresgentatives net with Hitch and presented a list of 2 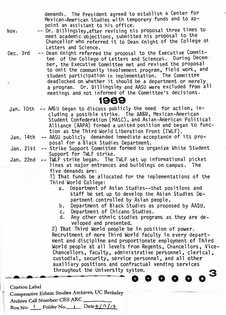 demands. The President agreed to establish a Center for Mexican-American Studies with temporary funds and to ap-point an assistant to his office. Roy. -- Dr. Billingsleyofter revising his proposal three times to meet academic objections, submitted his proposal to the Chancellor who referred it to Dean Knight of the College of Letters and Science. Dec. 3rd -- Dean Knight referred the proposal to the Executive Commit-tee of the College of Letters and Sciences. During Decem. ber, the Executive Committee met and revised the proposal to omit the community involvement program, field work, and student participation in implementation. The Committee deadlocked on whether it should be a department or merely a program. Dr. Billingsley and AASU were excluded from all meetings and not informed of the Committee's decisions. 1969 Jan. 10th -- AMU began to discuss publicly the need for action, in-cluding a possible strike. The AASU, Mexican-American Student Confederation (MASC), and Asian-American Political Alliance (PAPA) formed a united position and began to func-tion as the Third World Liberation Front (TWLF). Jan. 14th -- AASU publicly demanded immediate acceptance of its pro-posal for a Black Studies Department. Jan. 21st -- Strike Support Committee formed to organize White Student Support for TWLF strike. Jan. 22nd TWLF strike began. The TWLF set up informational picket lines at major entrances and buildings on campus. The five demands are: 1) That funds be allocated for the implementations of the Third World College: a. Department of Asian Studies--that positions and staff be set up to develop the Asian Studies De-partment controlled by Asian people. b. Department of Black Studies as proposed by AMU. c. Department of Chicano Studies. d. Any other ethnic studies programs as they are de-veloped and presented. 2) That Third World people be in position of power. Recruitment of more Third World faculty in every depart-ment and discipline and proportionate employment of Third World people at all levels from Regents, Chancellors, Vice-Chancellors, faculty, administrative personnel, clerical, custodial, security, service personnel, and all other auxiliary positions and confractual vending services throughout the University system. JO. IN, Mb+ 0 0 0 0 0 0 3 Citation Label Comparative Ethnic Studies Archives, UC Berkeley Archive Call Number. CRS ARC Box No. Folder No.—J— Date / 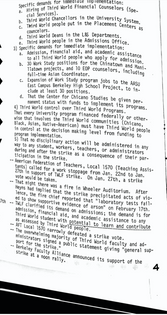 ic demands inniernane impiementation: ". nirim of Thirfdr World Financial Counselors Third Services)• b Third World Chancellors in the University System 0. Third World people put in the Placement [enters' fr."1"%i ne 'n the CIS Departments. a' d. Third World - '5 '• the Admissions Office Third World PeePie in , 1 e, se% -0 demands for inmediate implementation: * — — cif.ssion, financial aid, and academic assistance e* to all Third World people who apply for admission b 30 Work Study positions for the Chinatown and Mani — ,1000,„,, projets, and 10 EOP counselors, including • full-tine Asian Coordinator. c* Expansion of Work Study program jobs to the AASU East Campus Berkeley High School Project, to in-clude at least 30 positions. d. That the Center for Chicano Studies be given per-minent status with funds to implement its programs. 4) Third World control over Third World Programs. That every University program financed federally or other-, wise that involves the Third World communities (Chicano, p Black, Asian, Native-American) must have Third World people prcgram implementation. in control at the decision making level from funding to F 5) That no disciplinary action will be administered in any way ato dny student, workers, teachers, or administrators during and after the strike as a consequence of their par-ticipation in the strike. --Omerican Federation of Teachers, Local 1570 (Teaching Assis-Msic1 sailed for rkstagefromJal22nd support of TWLF strtonaan.it,atr vote would be taken. re was a fire in Wheeler Auditorium. After fence, lmdest thestrike precipitated at of vio-rth51vderted that "laboratory tests fail-ead‘mifi asFsoonns: on February.17th. ;I, s 1 , te dd s f and academic assihstanceeman toi anyor otential to learn and contribute .. Te Worl peo e mini defeatedyl :itorrilkdefrctuli smart giving "Ygeteine'lliald-sup-Ce announced its support of the 4