A quote by Ted Nelson, the man who invented hypertext.

“The world is not yet finished, but everyone is behaving as if everything was known. This is not true. In fact, the computer world as we know it is based upon one tradition that has been waddling along for the last fifty years, growing in size and ungainliness, and is essentially defining the way we do everything. My view is that today’s computer world is based on techie misunderstandings of human thought and human life. And the imposition of inappropriate structures throughout the computer is the imposition of inappropriate structures on the things we want to do in the human world.”

He is saying technology is shining back on us. We made it, and now it is making us. The abstractions we created have distortions that hurt and reduce us.

People believe there’s an essence to the computer, that there’s something true and real and a correct way to do things. But—there is no right way. We get to choose how to aim the technology we build. At least for now, because increasingly, technology feels like something that happens to you instead of something you use.
What screens want needs to match up with what we want.

I don't see the intimacy gradient designed into digital spaces because they're optimized for different purposes. They're optimized to get as many people on and if you look at the history of social networks, we used to call them social networks and now we call them social media. Because there's a business model tied to advertising that requires that people stay on the platform as long as possible, even when you're done with meaningful exchanges with the people you know and the sources you want to follow. TikTok and the Vibes Revival 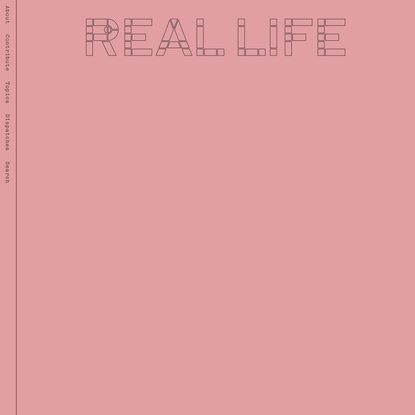 My physical body no longer feels like the “center of gravity” of my identity… my sense of presence is forever fractured and distributed all over the place. I close my eyes and imagine all the screens that are displaying my content at this very moment, I wonder about the total number of pixels I currently occupy, I feel like I am nowhere and also everywhere.

What is being normalized here is the disparity between our online and offline selves. As we flaunt and exploit our online personas for the gratification of the actual voyeur within us, the divide widens. We watch ourselves being watched, to borrow Berger’s idiom, and thereby hand over power to those who survey us—not to an individual or demarcated group, but simply to the abstract notion of the audience. The power differential is eventually felt personally, sometimes painfully, because the audience is never clearly identified.

Adams says his biggest misgiving with Instagram is that it seems to “represent a liquidation of marginal experience.” Waiting at a crosswalk suddenly becomes a moment to be transformed into content (or to check in on how your content is being evaluated). There’s less time to simply exist outside of production and consumption. Life becomes limned by phone-pickups and the buzz of notifications. “If you could say marginal experience is a kind of public good, then the whole thing seems like a typical piece of neoliberalism. It extends the possibility of instrumentalization to almost all waking moments.” It reprograms us to seek out content to be recorded all the time, turning our minds into their own kinds of cameras, knowing that we could always be posting, hoping for the most likes. It also demands a certain immediacy, not only reframing how we see, but how we allow ourselves to process what we’re taking in, possibly turning the artist into a half-baked influencer chasing abridged ideas and images. “It requires carrying the possibility of using it along as part of one’s way of seeing all the time.”

We’re all looking for more popularity, new ways to find an edge; and yet, all this competition only seems to lead to blandness and mediocrity, rather than breakthroughs. Nor does it lead to collapse; even accelerationism doesn’t work. We want too much content, too fast, and it just leads to this endless algorithmic churning, this paint-by-numbers effect. You see it in art. In Netflix documentaries. Spotify playlists. Op-ed pages. The news. The latest manufactured outrage. Well-reviewed first-person novels about nothing. All so dreadfully banal and repetitive. This is what results when everything is forged in economies of dollars, of ether, of attention. Most culture now has the feeling of having been made by algorithm; and the reason for this, is that humans have begun to act like algorithms.