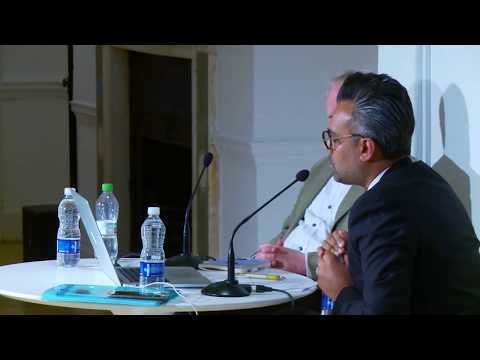 "The problem thereafter was not to teach the prisoners something, but rather to teach them nothing, so as to make sure that they could do nothing when they came out of prison. The futile character of penal labour, which was linked initially to a didactic plan, now came to serve a different strategy." (p. 42)

"What makes the presence and control of the police tolerable for the population, if not fear of the criminal? This institution of the police, which is so recent and so oppressive, is only justified by fear." (p. 47)

"I don't say that humanity doesn't progress. I say that it is a bad method to pose the problem as: 'How is it that we have progressed?'. The problem is: how do things happen? And what happens now is not necessarily better or more advanced, or better understood, than what happened in the past." (p. 50)

"The exercise of power perpetually creates knowledge and, conversely, knowledge constantly induces effects of power. The university hierarchy is only the most visible, the most sclerotic and least dangerous form of this phenomenon." (p. 52)

"It is not possible for power to be exercised without knowledge, it is impossible for knowledge not to engender power." (p. 51)

"I quote Marx without saying so, without quotation marks, and because people are incapable of recognizing Marx's texts I am thought to be someone who doesn't quote Marx... It is impossible at the present time to write history without using a whole range of concepts directly or indirectly linked to Marx's thought and situating oneself within a horizon of thought which has been defined and described by Marx. One might even wonder what difference there could ultimately be between being a historian and being a Marxist. (p. 52-53)

"It was Nietzsche who specified the power relation as the general focus, shall we say, of philosophical discourse - whereas for Marx it was the production relation. Nietzsche is the philosopher of power, a philosopher who managed to think of power without having to confine himself within a political theory in order to do so. Nietzsche's contemporary presence is increasingly important. But I am tired of people studying him only to produce the same kind of commentaries that are written on Hegel or Mallamre. For myself, I prefer to utilize the writers I life. The only valid tribute to thought such as Nietzsche's is precisely to use it, to deform it, to make it groan and protest. And if commentators then say that I am being faithful or unfaithful to Nietzsche, that is absolutely no interest." (p. 53-54)

"In this calling in question of the equation: Marxism = the revolutionary process, an equation that is constituted a kind of dogma, the importance given to the body is one of the important, if not essential elements." (p. 57)

"...it's my hypothesis that the individual is not a pre-given entity which is seized on by the exercise of power. The individual, with his identity and characteristics, is the product of a relation of power exercised over bodies, multiplicities, movements, desires, forces." (p. 73-74)

"As far as I'm concerned, Marx doesn't exist. I mean, the sort of entity constructed around a proper name, signifying at once a certain individual, the totality of his writings, and an immense historical process deriving from him... It's always possible to make Marx into an author, localizable in terms of a unique discursive physiognomy, subject to analysis in terms of originality or internal coherence. After all, people are perfectly entitled to 'academise' Marx. But that means misconceiving the kind of break he effected. (p. 76)

"The longer I continue, the more it seems to me that the formation of discourses and the genealogy of knowledge need to be analyzed, not in terms of types of consciousness, modes of perception and forms of ideology, but in terms of tactics and strategies of power." (p. 77)

"...we are forced to produce the truth of power that our society demands, of which it has need, in order to function: we must speak the truth; we are constrained or condemned to confess or to discover the truth." (p. 93)

"The bourgeoisie could not care less about delinquents, about their punishment and rehabilitation, which economically have little importance, but it is concerned about the complex of mechanisms with which delinquency is controlled, pursued, punished and reformed etc. " (p. 102)

[Genealogy] "a form of history which can account for the constitution of knowledges, discourses, domains of objectives etc,. without having to make reference to a subject which is either transcendental in relation to the field of events or runs in its empty sameness throughout the course of history." (p. 117)

while Cognitive Behavioural Therapy is less interested in locating the source of negative beliefs than it is in simply replacing them with a set of positive stories. It is not that these models are entirely false, it is that they miss – and must miss – the most likely cause of such feelings of inferiority: social power. The form of social power that had most effect on me was class power, although of course gender, race and other forms of oppression work by producing the same sense of ontological inferiority, which is best expressed in exactly the thought I articulated above: that one is not the kind of person who can fulfill roles which are earmarked for the dominant group.

They refer to these bioinformatic strategies as “Publicity and Police,” the agencies of Spectacle and Biopower “through which the liberal State gives transparency to the fundamental opacity of the population” in order to more efficiently “manage” it. For Tiqqun, Police and Publicity are two sides of the same Imperial coin, and both must be resisted. 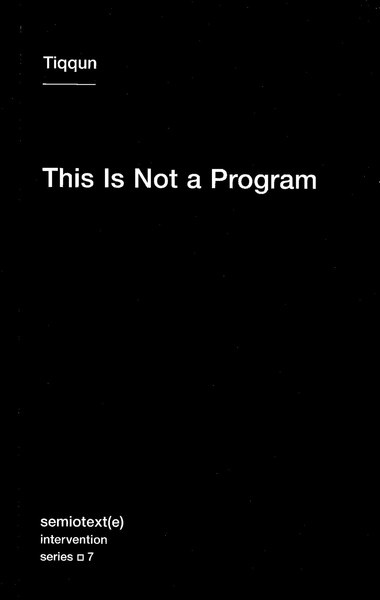 For Tiqqun, Hardt and Negri’s Empire represents the apotheosis of a wrong turn in radical politics. They believe that by extolling the revolutionary potential of the same flows of communication and information that make surveillance and population “management” so easy, Hardt and Negri celebrate rather than dispute Imperial strategies of control.

While Empire has become one of the darling texts of the so-called alter-globalization movement, it was also subject to critique from the Left for its starry-eyed optimism and, as Gopal Balakrishnan put it in the New Left Review, for “recasting some of the mythologies of American liberalism.” I take this as a critique of Hardt and Negri’s faith in a benevolent form of world sovereignty brought to heel by the multitude, a sovereignty that could guarantee the list of universal human rights that they present in Empire, one which would derive its legitimacy from all-inclusive global democratic processes.

Empire theorizes about the power of the new subject that the “productive flows of bodies” conjures into existence: they are the “multitude” of migrant and contingent workers able to leverage Empire’s dependency on their diffuse biopower into a confrontation with Empire’s decentralized control in order to contest the abuse of human rights.

s Apple users were dismayed to learn earlier this year, US corporations export sweatshop labor and environmental pollution to labor pools desperate enough to accept those conditions, far from the purview of American consumers.