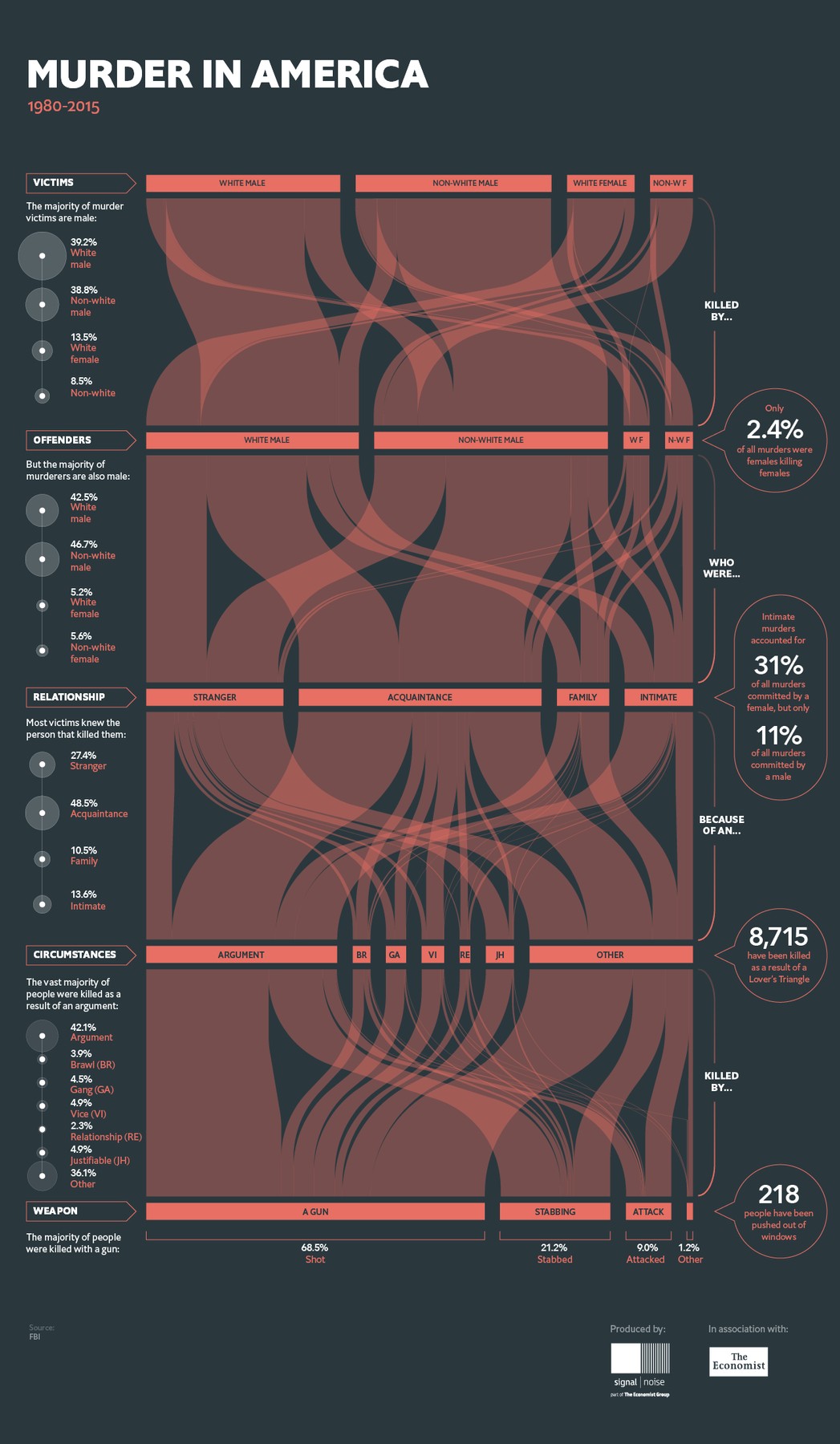 1) Why did you choose this visualization?

I selected this particular visualization exploring murder in America from 1980-2015 because it heavily reminded me of some of the ideas and questions posed by Mimi Onuoha's The Point of Collection, especially in how the data and insights communicated by this graphic are results of their means of collection. For instance, when collecting data, the creator of this visualization intentionally decided to categorize people in a binary fashion by labeling them either white males or non-white males and white females and non-white females. The creator's decision in not conveying the ethnicities of the non-white perpetrators and victims removed the possibilities of revealing valuable insights about how race relations.

2) What data / information was used to produce this visualization?

The visualization received its data from the FBI and tracks murders from 1980-2015. Several different aspects of murder are explored in this visualization in who was the victim, who was the offender, the relationship between victim and offender, the circumstances in which the murder occurred, and finally the weapon used (if applicable).

3) How is the data / information represented?

The visualization is separated into a grid of three columns and five rows, with each row exploring a different aspect of murder. The left column is reserved to give a percentage breakdown of the information presented per row. The middle column is a red Sankey diagram where relevant labels and elements are connected together using these flowy, stream-like shapes. Finally on the right column, there are speech bubbles that contain insights about each aspect of murder explored. This particular visualization often uses percentages to communicate insights.

4) What’s the visualization trying to say / what’s the story?

The visualization provides a macro overview of the state of murders in America in that it exists and the situations and circumstances in which they occur vary. This visualization also tells me that especially within the time span between 1980 and 2015, predominantly white individuals make up a large chunk of murder victims and offenders in America. This is especially significant due to the fact that so many individuals of different ethnicities reside in this country. Finally, there are these micro insights with how the different aspects murder are explored. For an example, most murders shown on this graphic were carried out with a gun. This could be potentially be an alarming insight regarding the escalating state of gun violence in the United States.

I think the visualization could have included more information to be more effective. For an example, the timeframe in which the data was from is pretty wide but there are few instances in the actual scale of people affected is shown. I don't know how large this data pool is and therefore these percentages shown don't give me enough of perspective. Additionally, as of now, the visualization unintentionally puts a lot of emphasis solely on white victims and offenders. I think that if there was also an inclusion of breakdown of different ethnicities under the non-white victims and perpetrators, the visualization would definitely be more compelling and convey how widespread murder in America is.

Added over 1 year ago by Daniel Kim
Last updated 7 months ago
Source
Actions
Flag
ShareFind originalDownload
2 Connections
Connect →
Read This PDF
5 blocks
by Juan Agrón
Ch. 2: "That which we ignore reveals more than what we give our attention to."
27 blocks
by Des384 – Winter 2021
Group