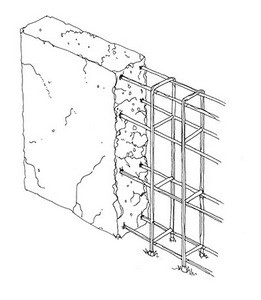 Although concrete has been prized for millennia in architecture for its weight-bearing strength, the addition of steel reinforcing bars (“rebar”) to improve the material’s tensility was first developed during the mid-19th century in France. Since concrete can be poured and metal can be bent into any shape, many architects have taken advantage of this versatile and cost-effective material to construct complex structures. Beginning in the early 20th century, the Belgian architect Auguste Perret (with the help of his brothers, Gustave and Claude) built the world’s first reinforced concrete apartment block at 25 rue Franklin, in Paris. The unparalleled strength of reinforced concrete meant that fewer structural supports were needed, which allowed Perret to use large windows on the facade to let in more light and to create more open space on each floor. Many iconic buildings of the 20th and 21st centuries have since been built using reinforced concrete construction, including Frank Lloyd Wright’s Solomon R. Guggenheim Museum, in New York; Le Corbusier’s Villa Savoye, in Paris; and the Burj Khalifa (currently the world’s tallest building), in Dubai.