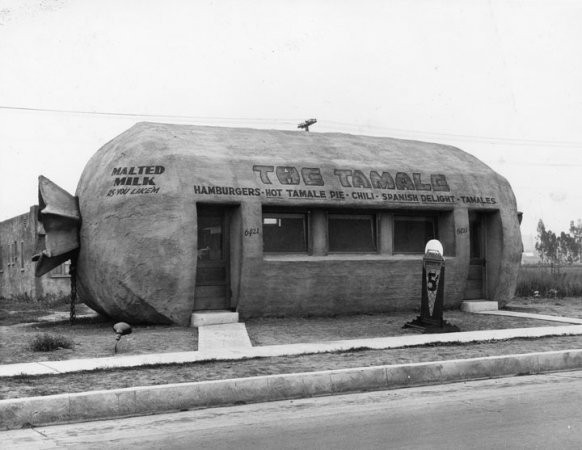 Originally opened in 1928 as a restaurant that served “Tamale pies,” malts, and other “Spanish delights” along with hamburgers and chili, The Tamale is now home to a beauty salon and a dental laboratory. In 1984, The Tamale was transformed from a restaurant and adaptively reused to meet the needs of its current tenants. This particular building, which was designed to look like a wrapped tamal, has seen its exterior color change throughout the years but is largely intact. Increasingly rare, few examples of programmatic architecture exist in Los Angeles today.

Programmatic architecture momentarily dotted the Greater Los Angeles landscape as it catered to the area’s expanding car culture and commuters by utilizing a commercial building’s architecture to advertise what products consumers could expect to find inside. Other well-known, extant examples of this style of architecture are The Donut Hole in La Puente and The Darkroom in the Miracle Mile area. The programmatic style of architecture became popular in the 1920s and 1930s, and it was highly influenced by the exponential rise of the automobile, a trend that grew through the post-war era. In California Crazy & Beyond: Roadside Vernacular Architecture, urban anthropologist Jim Heimann highlights The Tamale as clear example of extant programmatic architecture in the Los Angeles area.

Added over 4 years ago by Karly W.
Last updated almost 4 years ago
Source: The Tamale | Los Angeles Conservancy
Actions
ShareFind originalDownload
2 Connections
It is what it is
11 blocks
by Christopher Roeleveld
Objects that look like food
12 blocks
by Billy Rennekamp
Connect →