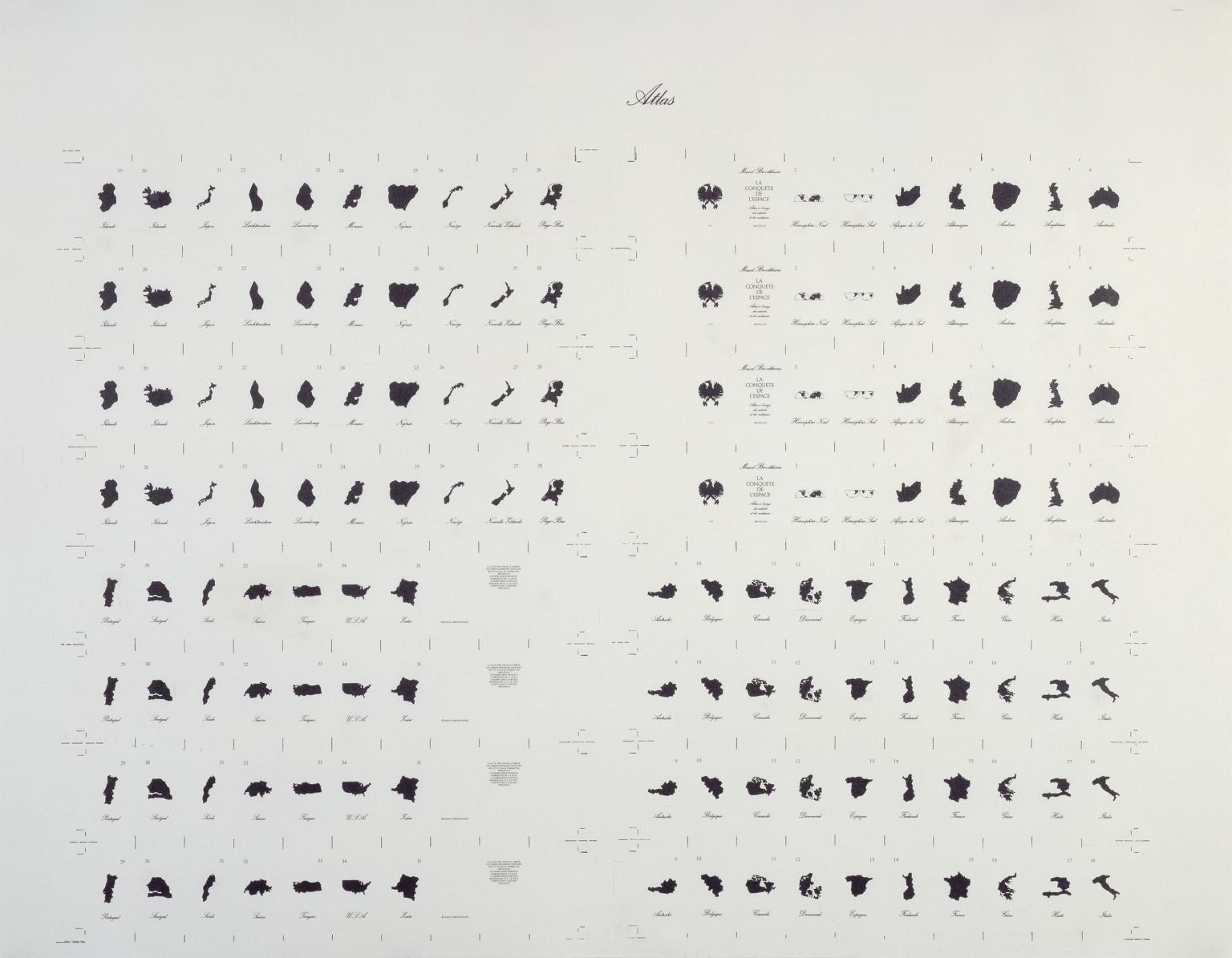 Atlas comprises the untrimmed printed sheet of the pages of a miniature book by Broodthaers called The Conquest of Space. Atlas for the Use of Artists and the Military.1 The sheet has the potential to make four copies of the tiny book, which measured only thirty-eight by twenty-five millimetres bound and boxed.

The first two illustrated pages from the book depict the Northern and Southern hemispheres. The following pages each show the black silhouette of a different country. Thirty-two different countries are represented in alphabetical order (in all cases apart from the ‘U.S.A.’, captions give the country’s name in French). This highlights their unusual order on the sheet: rather than commencing in the upper left corner, as might be expected, the early pages are situated in the upper right corner of the sheet, followed by the lower right, then the upper and lower left quarters. Reading them in this order, the countries represented are as follows: South Africa, Germany (the former DDR or West Germany), Andorra, England (though the image includes Scotland and Wales also), Australia, Austria, Belgium, Canada, Denmark, Spain, Finland, France, Greece, Haiti, Italy, Iceland, Japan, Lichtenstein, Luxembourg, Monaco, Nigeria, Norway, New Zealand, Netherlands, Portugal, Senegal, Sweden, Switzerland, Turkey, U.S.A. and Zaire (the present Democratic Republic of Congo). Broodthaers’s choice of countries was apparently arbitrary; most, though not all, are European, or countries that were once colonised by European countries, such as Senegal or Zaire, colonised by France and Belgium respectively. Rather than representing them to scale, Broodthaers has depicted them all with the same dimensions. For example, the tiny principality of Monaco, which in reality occupies less than two square kilometres, is depicted the same size as the much larger Canada, which covers nearly ten million square kilometres.

A common atlas acts as a diagrammatic representation of the world, made up of geographical signs that denote the physical features of a country or region that, when interpreted in relation to one another, convey meaning. For example, the reader of an ordinary map or atlas would expect to see blue lines and would know to interpret these as rivers or streams. Interpreting the map requires prior knowledge of a set of visual conventions, signs and symbols that indicate meaning. Broodthaers’s Atlas disrupts these conventions, as well as the sense of scale, in order to question them. It develops ideas that the artist had previously explored in works such as Utopian Map of the World 1968. This earlier work was an altered poster of a map of the world, in which different areas were distinguished by bright patches of colour highlighting ideological and political, rather than geographical, differences. Broodthaers altered the printed title of the map – ‘Carte du Monde Politique’ – crossing out the final word and replacing it with ‘Utopique’. Thomas McEvilley has described the implications of this form of interventionist image-making: ‘thus the world of political divisions becomes an arbitrary, artificial overlay on a material reality that lacks it.’2

In Atlas, Broodthaers moved even further from the familiar form of the world map, presenting something more like an alphabet, or an A–Z of countries. Here there are no cities, roads or geographical features such as mountains or rivers: instead he presents a flat black shape that offers no clue as to the physical landscape of the country depicted. As well as showing the countries of equal size, Broodthaers’s atlas presents them all individually isolated, with no suggestion as to their geographical position in relation to one another. In effect, all countries are rendered as islands, adding yet another layer of confusion. By eliminating its relational structure, Broodthaers negated the very purpose of the atlas, exposing the artificiality of its conventions. The repetition of each country four times over also highlights the decorative qualities of the atlas, undermining its true function.

By using the title Atlas, Broodthaers presents a playful reminder of his intervention. He added the word Atlas in pencil at the top of the sheet after the rest of it was printed. The book’s title page may be seen in the top right quarter of the sheet. It is preceded by the stylised symbol of the eagle, which by 1975 had become synonymous with the multiple manifestations of Broodthaers’s Museum of Modern Art. Department of Eagles. In one manifestation of this hypothetical institution, Broodthaers collected together numerous examples of the image of the eagle from the realms of art, advertising and historical artefact. Broodthaers was interested in the symbolic power of the eagle and the ways in which, throughout history, this single image had assumed different meanings. In a three-point statement dated 1971, Broodthaers outlined the aims of his project:

To baffle every ideology which can be formed around a symbol (it is false).
To study objectively these symbols (the eagles) and particularly their use in artistic representation (eagles are useful).
To use the discoveries of conceptual art to illuminate objects and pictures of the past.
Conclusion: the eagle is a bird.3
Broodthaers’s banal conclusion undermines the perceived power of the symbol of the eagle: it is, after all, just a bird. In Atlas the eagle precedes the countries, implying that its pictorial and symbolic conventions are no more substantial.

Broodthaers declared in the title of his book The Conquest of Space that his atlas was ‘for the Use of Artists and the Military’. The juxtaposition of these two groups unites them in the joint activities of mapping and classification, making a comparison between the delineation of geographical space and artistic space. The artist, the title implies, must battle against the restrictions of the art world just as the soldier battles to gain ground in a military campaign. Broodthaers’s Atlas produces a false outcome for both, since his atlas is fundamentally flawed. His ironic inclusion of artists as users of this unusual book may suggest a loss of faith in art’s ability to describe life, waylaid by a series of inaccurate and misleading signs. Broodthaers had earlier adopted a similar strategy in his repeated, arbitrary use of the denotations ‘Fig. 1’, ‘Fig. A’, ‘Fig. 0’ etc., which appeared in several of his works, including the 1971 manifestation of his ‘museum’, the Section Cinéma in Düsseldorf.4 There, the repeated use of the same labels and the absence of any unified sequence undermine display conventions and render such labels meaningless. In Atlas, the disruption of the conventions of mapmaking may be seen in part to echo his defiant attitude towards the superficial trappings and classificatory systems of the art world. With Atlas, however, he broadened his target to include all forms of systematic signification, revealing a fundamental mistrust of the signs that govern our understanding of the world.