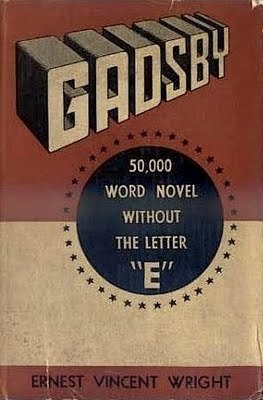 Gadsby: A Story of Over 50,000 Words Without Using the Letter "E" is a 1939 novel by Ernest Vincent Wright. The plot revolves around the dying fictional city of Branton Hills, which is revitalized thanks to the efforts of protagonist John Gadsby and a youth group he organizes.

The novel is written as a lipogram and does not include words that contain the letter "e". Though self-published and little-noticed in its time, the book is a favorite of fans of constrained writing and is a sought-after rarity among some book collectors. Later editions of the book have sometimes carried the alternative subtitle: 50,000 Word Novel Without the Letter "E".

If Youth, throughout all history, had had a champion to stand up for it; to show a doubting world that a child can think; and, possibly, do it practically, you wouldn't constantly run across folks today who claim that "a child don't know anything." A child's brain starts functioning at birth; and has, amongst its many infant convolutions, thousands of dormant atoms, into which God has put a mystic possibility for noticing an adult's act, and figuring out its purport.