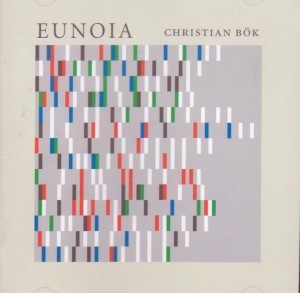 ‘Eunoia’ is the shortest word in English to contain all five vowels, and the word quite literally means ‘beautiful thinking’. Eunoia is a univocal lipogram, in which each chapter restricts itself to the use of a single vowel. The text makes a Sisyphean spectacle of its labour, wilfully crippling its language in order to show that, even under such improbable conditions of duress, language can still express an uncanny, if not sublime, thought.

Eunoia abides by many subsidiary rules. All chapters must allude to the art of writing. All chapters must describe a culinary banquet, a prurient debauch, a pastoral tableau and a nautical voyage. All sentences must accent internal rhyme through the use of syntactical parallelism. The text must exhaust the lexicon for each vowel, citing at least 98% of the available repertoire (although a few words do go unused, despite efforts to include them: parallax, belvedere, gingivitis, monochord and tumulus). The text must minimize repetition of substantive vocabulary (so that, ideally, no word

appears more than once). The letter Y is suppressed.