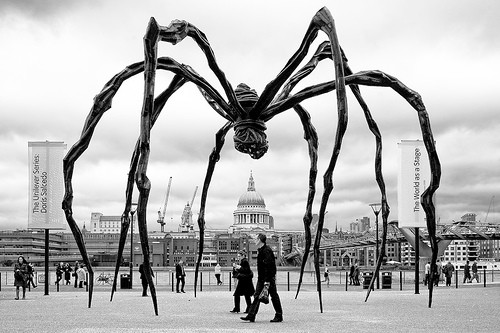 from icon-icon: 8 legs and too many eyes to count, all mounted on a hirsute body. Spiders are known to globally provoke fear, hysteria, and sometimes even death. Known for her steel spider monument dubbed "Maman" (French for "Mom"), displayed everywhere from Tokyo to New York to London’s Tate Modern, this is a piece that was meant to be admired; its frozen moments cast its shadow on its surrounding exposition’s white walls. The artist gained inspiration for the spider motif from her mother, a tapestry repairer who indeed spun many a web of her own, in addition to being a protective maternal figure. But there’s more to this story: little Louise had a hard time with the adulterous love triangle between her father, her nanny, and her mother, who willfully turned a blind eye. And so, Louise Bourgeois saw art as a means to keep her own sanity. The artist she became now materializes her fears in order to banish them, letting her anguish melt into joy.

The "spider woman" said herself that her "best friend was [her] mother and that she was also intelligent, patient, proper and useful, reasonable, indispensable, like a spider. She could defend herself." The loss of this very same mother when Louise was only 21 provoked her departure to America, and was even the starting point for her career. She later rendered homage to her through her spiders, powerful animals that are yet so fragile when faced with mankind, just like her mother’s relationship with her father.