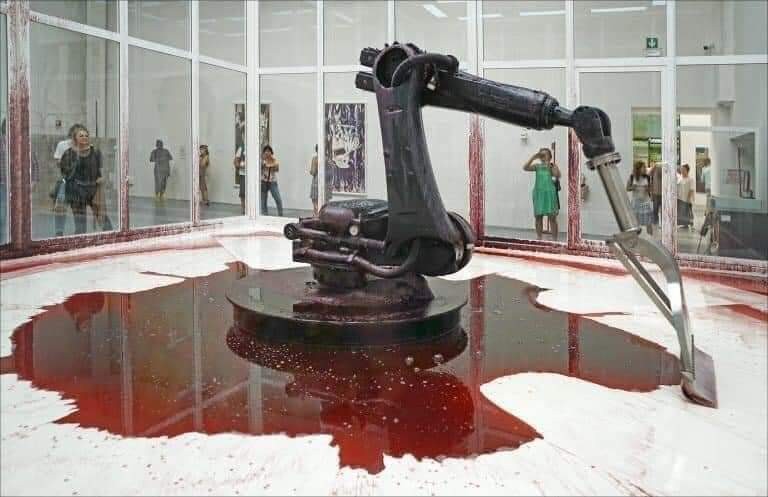 "No piece of art has ever emotionally affected me the way this robot arm piece has. It's programmed to try to contain the hydraulic fluid that’s constantly leaking out and required to keep itself running...if too much escapes, it will die so it's desperately trying to pull it back to continue to fight for another day. Saddest part is they gave the robot the ability to do these 'happy dances' to spectators. When the project was first launched it danced around spending most of its time interacting with the crowd since it could quickly pull back the small spillage. Many years later... (as you see it now in the video) it looks tired and hopeless as there isn't enough time to dance anymore.. It now only has enough time to try to keep itself alive as the amount of leaked hydraulic fluid became unmanageable as the spill grew over time. Living its last days in a never-ending cycle between sustaining life and simultaneously bleeding out... (Figuratively and literally as its hydraulic fluid was purposefully made to look like it's actual blood).

The robot arm finally ran out of hydraulic fluid in 2019, slowly came to a halt and died

Added 5 months ago by A.nshka ⠀
Last updated 4 months ago
Actions
Flag
ShareFind originalDownload
1 Connection
Connect →
Around us, among us
38 blocks
by A.nshka ⠀