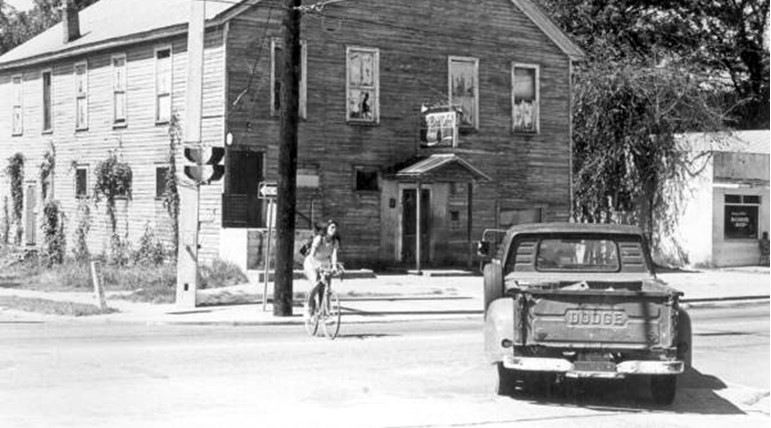 Located in the heart of Frenchtown, the Red Bird Café on Macomb Street was a thriving hub for music. The Café was housed inside an old meeting hall for the Knights of Pythias, an important fraternal society and mutual aid organization that resisted Jim Crow discrimination in the 1920s.

During the 1930s, the Hall reverberated with Jazz and Blues performances by famous musicians traveling the Chitlin’ Circuit. Greats such as B.B. King, Bobby "Blue" Bland, and Ray Charles, along with young budding musicians, like Nat and Julian "Cannonball" Adderley, graced the small stage of the place and lit up the night.

J.C. Adderley, father of prominent Blues musicians Nat and Cannnonball Adderley "[remembered] when the ... Hall was a place that generated a feeling of exuberant pride." To the community, it was more than a hall. It was a central gathering place to the Black community, equivalent to the prestigious Leon Hotel Ballroom and the popular Woman's Club".

In the 1970s, the Cafe started to decline, along with the rest of the neighborhood. Its doors closed in 1975.

Ten years later, the City attempted to spur economic and redevelopment efforts by purchasing "commercial properties in the 400 block of Macomb to help make the property more attractive to major developers."

Ralph Monroe, owner-manger of the old Monroe's Pool Room, said this action "put a lot of the merchants on alert" and made merchants wonder if "the City will be working with [us] ... or will all of us be forced out." Others said it's "as if [the City] don't have confidence in the people. But for development to take place, the people who live there must be involved -- you can't take it to them."

City Official Kleman responded by saying "plans are to continue to make housing available for the people who are living in Frenchtown today," and encouraging minority-business development.

Roberts, owner of the Economy Drug Store, "[remembers] how Frenchtown was, and [saw] the way it has gone down," but remains hopeful about the future of Frenchtown.