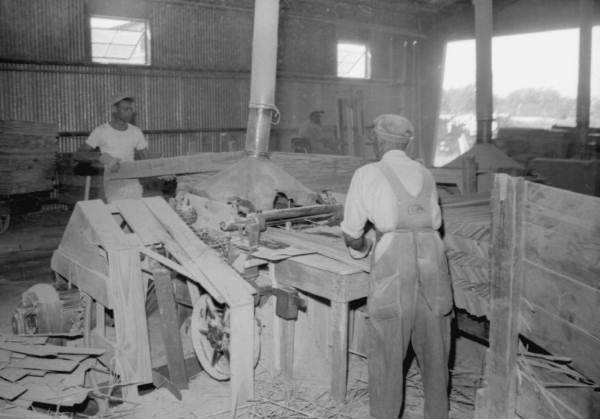 The Elberta Box and Crate Company was one of the major employers for residents in the Allen subdivision. At the time, Black workers felt “they had the best pay at Elberta Crate” because the company “paid enough to live off of." People made a living and even bought their own homes with the money they earned there.

By the 1960s, former Tallahassee Mayor Jack Simmons owned the business, leading the Company to gain a reputation for being a place that harbored unsafe working conditions and low wages -- pay ranged from $1.60/hr, the minimum wage, and up to $2.26/hr. Eventually, these conditions eventually led to a strike of more than 500 Black workers in Bainbridge (GA) and Tallahassee by September of 1969.

The workers, through an "all-Negro" union, demanded a "10% increase across the board", along with an established retirement system, renovations in employee insurance programs, improvement of plant safety and reform in hiring practices.

On October 14th, Reverend C. K. Steele led 60 blacks and whites from Bethel Baptist Church chanting "On Strike-Shut 'Em Down" on their way to the Capitol steps. Once they reached the steps, Rev. Joseph Franklin delivered a petition that listed the grievances against the Crate Company and asked the Human Relations Commission to investigate and support the demands of the union. At the protest, Father David H. Brooks of St. Michael's All-Angels Episcopal Church told strikers and strike sympathizers "you're not asking for the mountain, you're asking for a molehill but they're not even willing to give you that."

Later that day, FSU students lined the entrance to the crate factory and hurled derogatory remarks at the workers who still continued to work at the Crate Factory, despite the ongoing strike for better employment and working conditions. In response, Judge Willis ruled that strikers and students are to refrain from using such words as "scab" and "pig" in shouting at non-striking workers and police while the lawful picket is being conducted.

Despite the injunction, activists did not ease up. Rev. C. K. Steele led another larger group of marchers to the Capitol on October 30th demanding “raising the living wage of black workers everywhere.”

The managers at the company quickly acquiesced, and five days later they provided an acceptable contract to the striking members of the International Woodworkers of America. Workers at the crate mill, according to company sources, accepted a six-cent across-the-board raise for the first year and a five-cent per hour raise the second year plus an additional paid holiday.