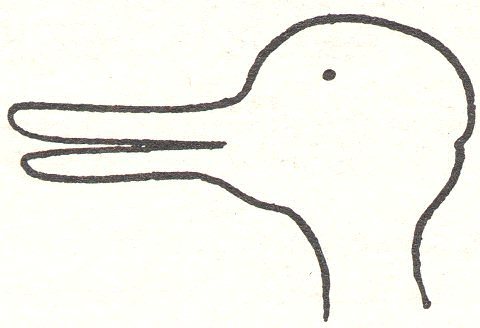 [The duck-rabbit] is a beautiful and clear example; but of what? Not of psychological subtleties, not of all cases of interpretation; in particular, not of all aesthetic experience. It is one case in which a figure can be read in alternative ways. The beauty of the thing lies, first, in the fact that the figure is so patently all in front of your eyes, it is nothing but outline, not even surface; second, that there are just two distinct possibilities of reading it, and they compete with one another; third, that no background of context is required (no imagination) against which to read it one way or the other; fourth, that you can see, as patently as you can see the figure itself, that the flip from one reading to another is due solely to you, the change is in you; fifth, that the flip is reversible, and, in particular, subject to will; sixth, that the expression of its flipping for you is an expression of being struck by something, each time taken by surprise, though obviously not unawares; seventh, that you can understand that the flip may not take place at all, that someone just may not see both possibilities. It is one of a series of examples with respect to which an unexpected range of concepts can be given application and in which one is brought to sense the complexity of their crossing - e.g., imagination, interpretation, experience, impression, expression, seeing, knowing, mere knowing, meaning, figurative meaning (Stanley Cavell, The Claim of Reason (New York: Oxford University Press, 1999), pp 354-5).