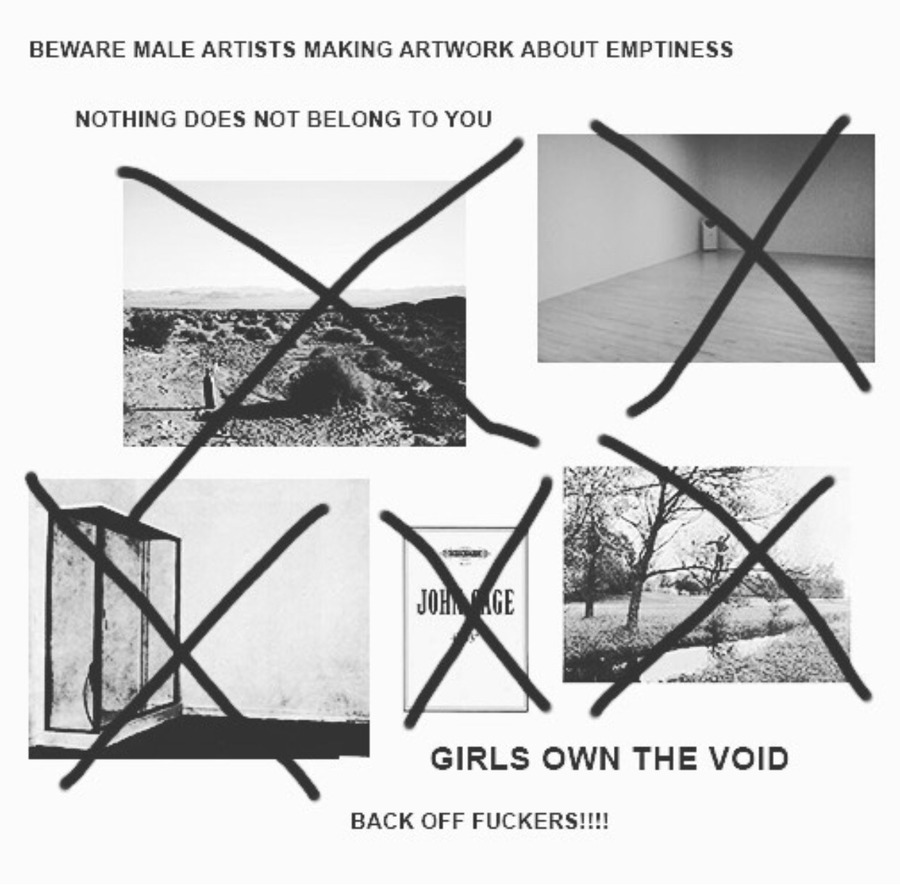 And is there any backstory to the line “Women own the void” from your video Art and Theft?

It’s a variation on a phrase from an image circulating online by the artist Audrey Wollen. I also think the concept was being talked about in other ways by other people, and I just absorbed it. A zeitgeist? There’s friction and contradiction inherent in that statement. How do you own a void? It’s inherently nothingness. I like the hubris of claiming the most nothing!

I feel torn by a desire to make positive assertions and a need to see the same thing from many angles. This makes me good at asking questions, but bad at making bold statements because too often I see the other side, and it seems valid, too.

Women understand abstraction because we’re all dysmorphic to some degree. We watch our bodies and the bodies of our female friends go through incredible transformations. And we “get” conceptual art because we’re all already abstractions of a concept: Adam, or “Man,” the original. In Christianity, women are told that they’re the extra rib. Women must conceptualize their sense of self from the very beginning.

This could so easily lead to some essentializing about women’s bodies, and who gets to be a woman. Well, I’ll speak for myself: I grew up as a woman. That’s all I know. Our bodies are so confusing and crazy. We go through puberty, we get hips and boobs of all shapes and sizes, some of us get pregnant or see our friends getting pregnant, bellies getting enormous, and imagining this other human growing inside. There’s a period during which we’re two people! Not to mention every month, part of our body turning inside out and leaking outside of our physical boundary. It’s pretty sci-fi, messy, and quite Ab-ex. Living in a female body is like Alien meets Jackson Pollock. Women really get that on a physiological level. I trust the body’s knowledge.