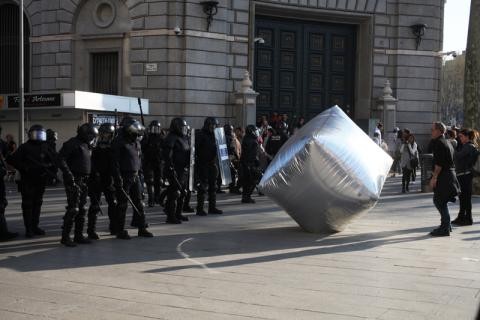 > First: inflatables uplift a grim protest situation into a playful event. There is something magic about what inflatables induce in people. Their enormous size combined with the weightlessness and softness makes them irresistibly attractive and dreamlike. People have a natural tendency to touch the inflatable sculpture and to join the game of throwing inflatables in the air—changing a march into a poetic, joyful and participatory event. In situations where people are kettled in, they serve as excellent playing devices not to let the atmosphere become boring or demoralizing.
>
> Second: in times of conflict inflatables can deescalate tension or protect ones own body. In both Berlin and Barcelona, when protesters and police were at their breaking point, the situation transformed when a silver inflatable cube bounced in. A protester throws it on to the police line, the police bounce it back, protesters push the inflatable back again. To everyone’s astonishment a ball game happened between protesters and the police. I have heard stories that in Barcelona two police men arrested an inflatable, squeezing the bulky shape into a police van. Not only do these kinds of situations break the binary confrontation between protester and police, they also ridicule authority.
>
> Third: inflatables provide strong visual imagery that can capture the media spectacle. Protests are often misrepresented or not represented by (mainstream) media. Journalists need a hook, something exciting, unusual or creative that they can spin their story around. An intervention with inflatables can provide this spectacular hook, especially when the joyful inflatable gets destroyed by agitated police or other opponents.