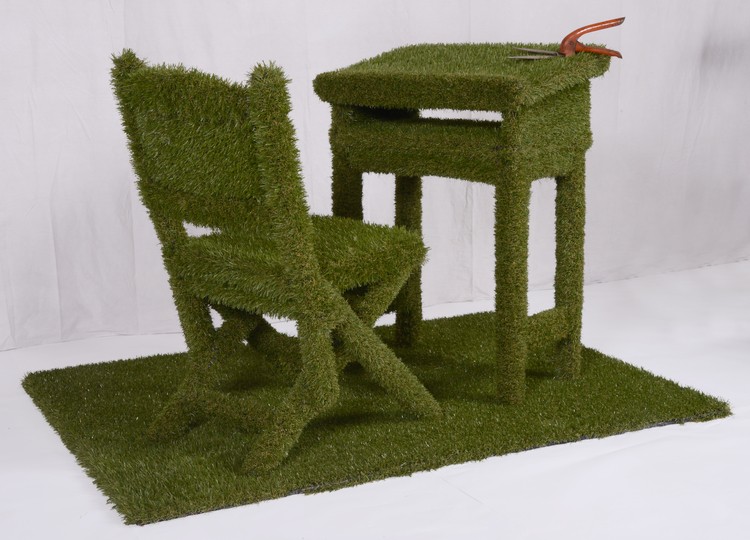 Naomi Siegmann was an American artist who has developed her career in Mexico, and noted for the depiction of everyday objects outside their normal contexts. She began her career after she moved to Mexico with her family, learning to carve wood.

Statement
I was born in New York and moved to Mexico with my husband and two children in the early 60's. The enormous change between Melchor Muzquiz -a small town in the state of Coahuila- and my Metropolitan home gave me the opportunity to reflect about the interesting direction my life had taken and probably led me to discover the great passion in my life: sculpture.

My adopted country's language, vivid colors, music, art and architecture, increasingly influenced my growing body of work. Captivated by Prehispanic art and history, I embarked on, and embraced, a new life. My imagery could be called abstracted realism and hyper-realism.

Behind the sculpted detail of realistic every day objects lies my desire to stimulate the observer's process of perception inviting them to see familiar objects in a new way, to question the relationship between actual physical reality and their perceived reality.

In the early 1970s, carving wood became a passion and was the medium in which I worked for the next 20 years until the 1990s, when my artistic expression began to move in another direction. I worked in bronze, steel, paper, acrylic, recycled materials and found objects. My work of the last 15 years reflects my interest in working with plants and trees, born from a desire to provoke thoughts about the vulnerability of Nature and the tenuous balance of its resources with its inhabitants. Human survival and the preservation of nature are not mutually exclusive: On the contrary, they are inexorably interrelated.

Although my work tends to be life-size, I have also constructed many large scale sculptures in stainless steel, iron, bronze, aluminum, foundry molds, found objects, both in Mexico and the United States.

The ancient poet Li Po said that trees that flow from the hand of artists do not reflect reality but a recreation of feelings which are produced in the presence of the forest.