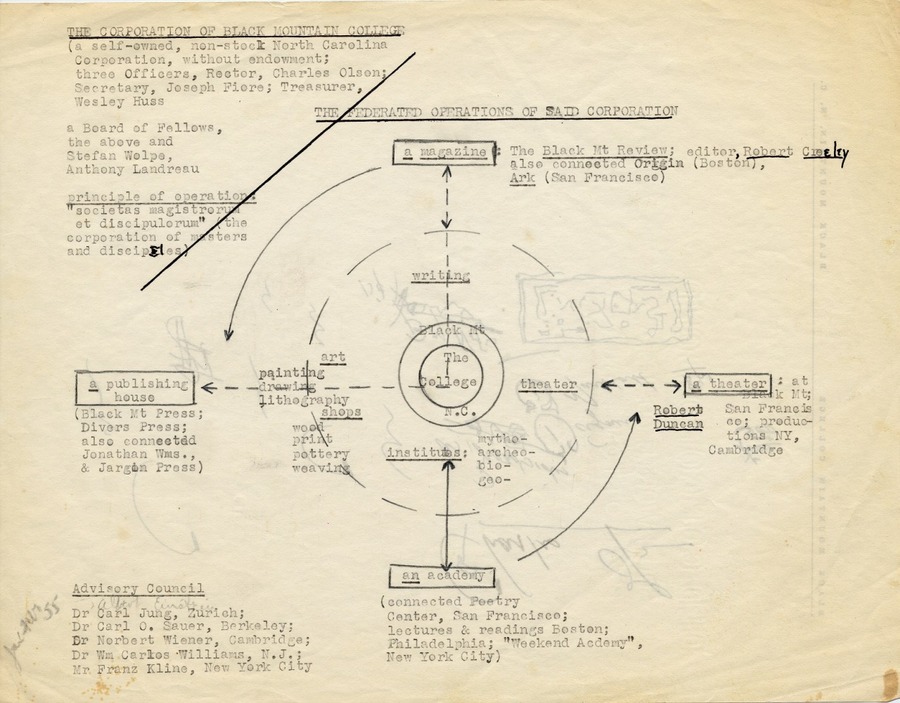 Plan for the Operation of Black Mountain College after 1956, Charles Olson, ca. 1954

Plan for the Operation of Black Mountain College after 1956, Charles Olson, ca. 1954 (as seen at -Leap Before You Look image via)

Update: Here is a related passage from Helen Molesworth from the Look Before You Leap catalog:

> One of Black Mountain College’s last “official” documents is Olson’s diagram circa 1954, typewritten on onionskin paper, of how the college might be saved, how it might continue despite the fact that it had nearly run out of funds (so much that the dining hall was closed, there was no coal to heat the buildings, and the remaining faculty and students, who had retreated to small cabins up on the hill, were, by some accounts, painfully hungry). “The College” is typed at the center point of the diagram’s concentric circles. Then, like a map, it branches out into quadrants that are marked not by direction but by types of institutions: a theater, an academy, a magazine, a publishing house, assigned with far-flung locations: Cambridge, Massachusetts; New York; Berkeley, California; Philadelphia; and San Francisco. Activities—painting, lithography, and writing—move away from the center to these outposts. North Carolina appears on the map in the center; underneath, it reads “mytho-, archeo-, bio-, geo-.” The diagram speaks to a desire for preservation through atomization. It is a dream picture of a cosmopolitan college of satellite institutions held together by a centripetal force, a myth at its center: Black Mountain College.

> It’s easy to see the diagram as born of desperation. Olson took over the leadership from Albers, acting as defacto rector until his official appointment in 1954, and the ship was sinking on his watch. To his credit, he did not abandon it: after the college closed, he stayed on to finalize its financial affairs, as well as its psychic ones —namely, the dispersal of John Rice’s library and the arrangement of long-term care for the gravesites of the beloved Jalowetz and the equally adored mathematics professor Max Dehn. Truth be told, Olson’s plan is not so far removed in spirit from that of the college’s founders. According to M.C. Richards, “At one time Rice said he thought the college should disperse every ten years into smaller units… . This was to avoid too much stability. It was to be faithful to the chaos out of which creativity constellates.” The diagram shows how Olson was trying to save what he felt was most important about the place. In an earlier document, written in 1952, when the days were sunnier and warmer, he had penned the following: “Black Mountain College carefully recognizes that, at this point in man’s necessities, it is not things in themeselves but what happens between things where the life of them is to be sought.” This rhymes with Bhabha’s earlier description of the cosmopolitan subject, whose identity comes not from a rooted place but rather from a movement between places, such that the relationships from a movement between places, such that the relationships between places is what is of interest and value. In his minor manifesto about what Black Mountain had to offer the prospective student in 1952, Olson suggests that although there are “no ideas but in things"—a phrase of William Carlos Williams he was fond of quoting—things (institutions, education, poetry, art) were meaninfgul only through the energy that transpired between them. Thus, some years later, he could imagine, in a diagram largely made up of gaps between lines and shapes, an institution whose energies were not rooted in a specific location but whose fertile seeds were carried by individuals to many places. It’s as if the diagram visualizes Gertrude Stein’s question, "What good are roots if you can’t take them with you?” Her quip must have rung in Olson’s ears when he sent a postcard from Washigton, DC, to Black Mountain student Fielding Dawson with the following bit of verse: