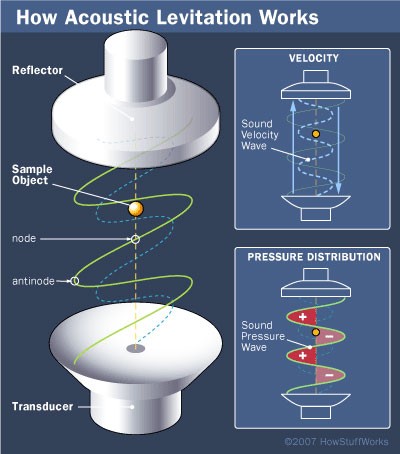 wave, like all sound, is a longitudinal pressure wave. In a longitudinal wave, movement of the points in the wave is parallel to the direction the wave travels. It's the kind of motion you'd see if you pushed and pulled one end of a stretched Slinky. Most illustrations, though, depict sound as a transverse wave, which is what you would see if you rapidly moved one end of the Slinky up and down. This is simply because transverse waves are easier to visualize than longitudinal waves.

Second, the wave can bounce off of surfaces. It follows the law of reflection, which states that the angle of incidence -- the angle at which something strikes a surface -- equals the angle of reflection -- the angle at which it leaves the surface. In other words, a sound wave bounces off a surface at the same angle at which it hits the surface. A sound wave that hits a surface head-on at a 90 degree angle will reflect straight back off at the same angle. The easiest way to understand wave reflection is to imagine a Slinky that is attached to a surface at one end. If you picked up the free end of the Slinky and moved it rapidly up and then down, a wave would travel the length of the spring. Once it reached the fixed end of the spring, it would reflect off of the surface and travel back toward you. The same thing happens if you push and pull one end of the spring, creating a longitudinal wave.

Standing sound waves have defined nodes, or areas of minimum pressure, and antinodes, or areas of maximum pressure. A standing wave's nodes are at the heart of acoustic levitation. Imagine a river with rocks and rapids. The water is calm in some parts of the river, and it is turbulent in others. Floating debris and foam collect in calm portions of the river. In order for a floating object to stay still in a fast-moving part of the river, it would need to be anchored or propelled against the flow of the water. This is essentially what an acoustic levitator does, using sound moving through a gas in place of water.

In space, where there is little gravity, floating particles collect in the standing wave's nodes, which are calm and still. On Earth, objects collect just below the nodes, where the acoustic radiation pressure, or the amount of pressure that a sound wave can exert on a surface, balances the pull of gravity.