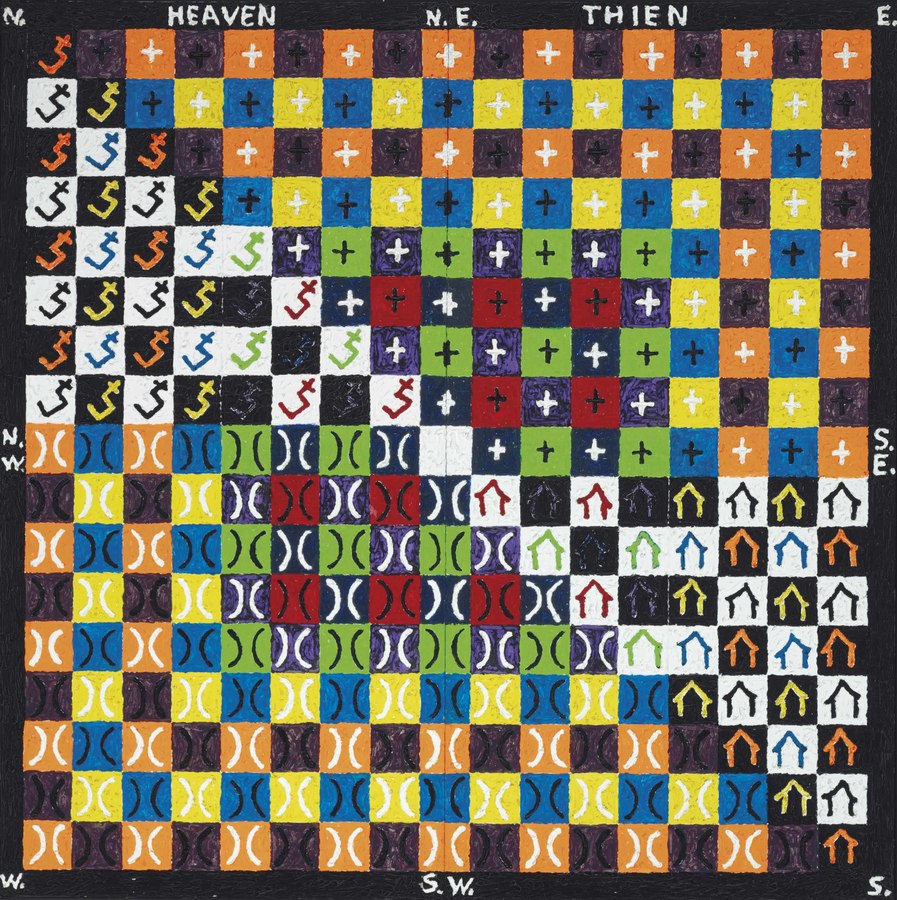 "Seemingly clear, yet irrefutably impenetrable, there is a haunting poetry in Alfred Jensen's work. Executed on a flat, thickly painted checkerboard of brightly quilted colors, Heaven Per I and Per II employs a combination of patterns and geometries that are classically familiar. While at first glance his paintings appear to be purely abstract, Jensen, a miner of ancient relics, mathematical systems, and theories of design intricately weaves a palimpsest of symbols and colors that unfold to reveal an isomorphic mapping of one system of ciphers over another. Through his own visual language, Jensen superimposes multiple systems of arithmetic and color theory with no immediate translations in attempt to make symbolic structures concrete.
Divided into two panels, or pers, Heaven; Per I and II sets a series of numbers from ancient Shang oracle bone inscriptions over a gridded study of the complementary hues of the color wheel, which are mirrored along the horizontal axes of the abutted canvases. Dating from 1554-1045 B.C.E., the oracle bones of the Shang dynasty are the earliest known written records from Chinese civilization, used by priests as a method of divination. Oriented on a square compass, perhaps derived from the square slabs found in the first magnetic compasses from the Qin dynasty, a set of four Shang numerals are situated in conjunction with the four cardinal directions-the character for 9 situated in the north top-left corner, 7 at the eastern corner, 6 to the south, and 8 at the western point.
A devoted student of Johann Wolfgang von Goethe, Jensen, here, plays with the optical vibrancy resulting from the juxtaposition of complementary colors. While the perimeters of the columns play on the traditional color star developed in 1867 by Charles Blanc, with the opposition of blue and orange, Jensen's reverence for Goethe is seen in the bisecting rows of blue and yellow. "Yellow is a light which has been dampened by darkness; blue is a darkness weakened by light" (J. Goethe, Theory of Colors, 1810, paragraph 502). Thus, Heaven emerges as a labyrinth of signs and systems atop a gridded compass, for which the organizing system plays an equally important role to the artist. "I find in the square specific settings, divisible areas, number structures, possibilities of time measure and rhythm as well as the essential form of color," Jensen explains. "The square's capacity latent in its arithmetical mean brings forth a reciprocal relation between the outwardly increasing area, and the inwardly decreasing area of the square. This coordination of number structures enabled the archaic people to erect temples and pyramids" (A. Jensen, quoted in W. Schmied, Alfred Jensen, exh. cat. Kestner-Gesellschaft, Hannover, 1973, p. 39). A connoisseur of the systems created by many different peoples to give beauty and meaning to their own lives, the systems that Jensen has selected to incorporate into his art are particularly rich in complexity, history, and symbolism." - Christies