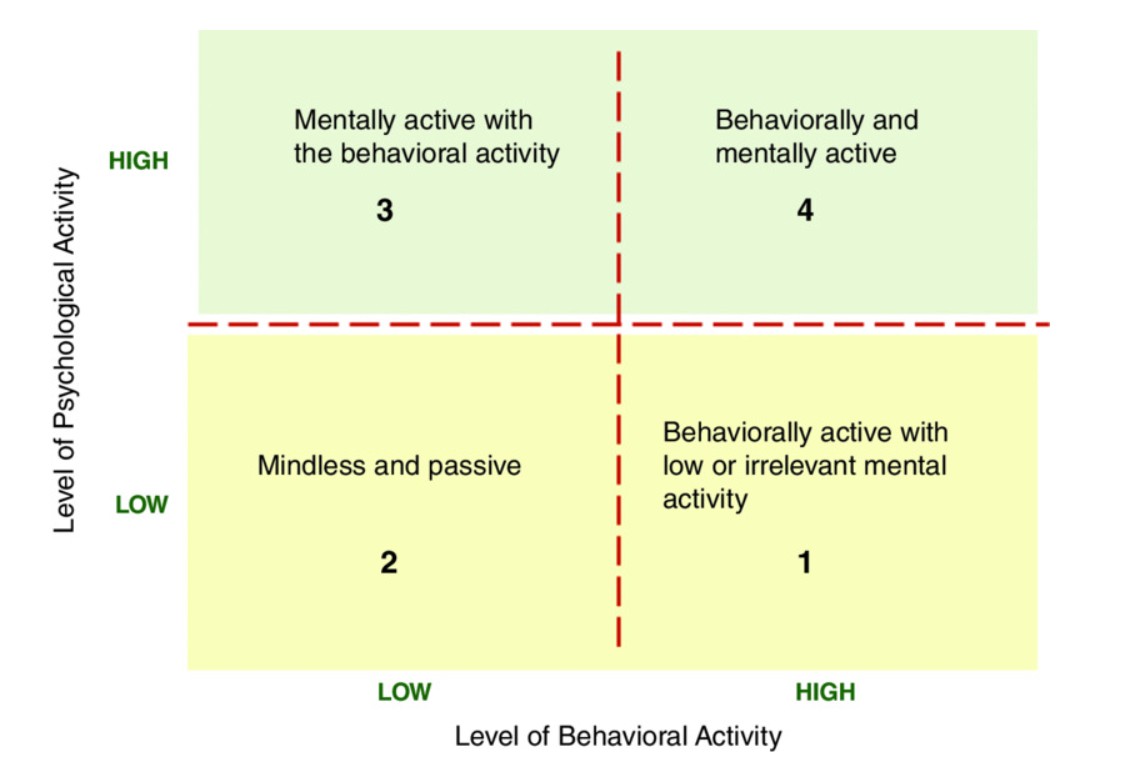 In Clark and Mayer chapter 11, they explain high engagement learning games that focus on stylistic video narratives alongside the learning (answering of questions, etc) may impede learning due to the eclipsing of behavioral activity (watching the character move in the environment, controlling the character) associated with it eclipsing the learning (question prompts).

Although I agree with this, there are three learning experiences that I've always want to design that adhere to behavioural activity:

I think it's important to be able to use technology to design for tactile/ kinesthetic experiences/learners. The focus on the tactile properties such as the vibration of objects keeps it simple, but charming in how subtle it is compared to the psychological activity. Elsewhere I've discussed my disdain for the sentiment of replicating physical reality, which is why I want any vibration of elements to be represented in a 2d aesthetic. There is a fiero in being able to manipulate the physical properties of an idea (i.e. a message box, responsive buttons) without sacrificing the psychological activity of synthesizing or encoding information. I argue it's not mindless or passive either, as the sensation of representations of touch visually makes the interaction with information more rhythmic, a push and pull of the prescence and abscence of it, rather than the learning experience incentivising another 'entertainment' focused experience; a bloating of mental space.

I was talking to Dr. Erica Lucci about how tactility is relevant and she mentioned montessori furniture, furniture used in montessori schools where the size and aesthetic of them is pschologically pleasing, and ergonomically suited for developing children. It facilitates an emotional autonomy over their own learning artifacts through the validation of physical autonomy.

You could argue that tactile approaches would only work for children due to their developing brains, however the application of this is towards the sentiment of reinforcing autonomy by letting student actions be closer to when they learn; the choice of having information when and when not to have information presented to them. I think they call this "learning control". The student actions are oriented towards the before and after the engagement of information rather than the present engagement with information. Watching a character run across the screen or a blasting down meteorites by solving the correct answers to a math problem is an example of learning being intertwined with the information rather than the abscence and prescence of it. It is important to have these tactile sensations linger, overlapping briefly when information is presented so that an immersion does not break from hard stops. The information itself has a life force, without making it distracting by anthropomorphizing it.