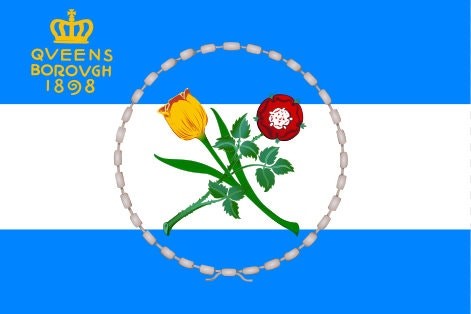 "This flag features nature most prominently of the five flags, the Queens borough historian, Jack Eichenbaum, pointed out. It was created in 1913.

The colors: Blue and white.

The symbols: The stripes are symbolic of the shield of the Dutch governor William Kieft, and the circle of wampum, of the American Indians. The tulip at the center stands for the Dutch, and the rose for the English. The year 1898 reminds us of when Queens became a borough in the consolidation of Greater New York City."