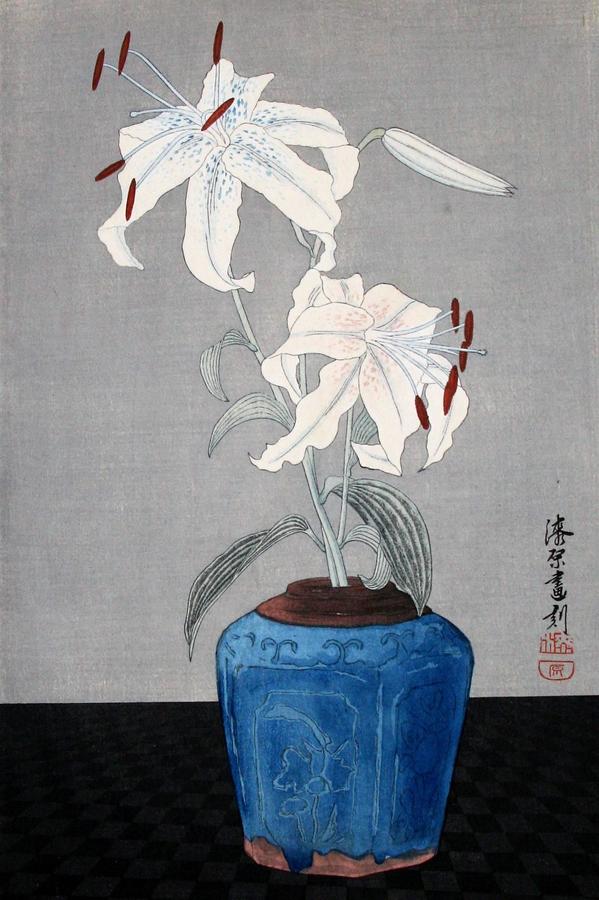 White Lilies. Woodcut printed in colors. 15 3/4 x 10 1/2 (17 1/2 x 12 3/8). Signed and annotated "No. 35" in pencil. Slight toning in margins about 1/4-inch just outside the image, not visible when matted; two unobtrusive small spots, one just under the right-hand lily and one just above the signature; otherwise a fine impression with good color, printed on Japanese mulberry paper.

Between the years 1908 and the late 1930’s Urushibara lived in England and France, and travelled much throughout western Europe. During this period the bulk of his woodblock work was produced in England and, as such, his printed works are considered as part of twentieth century British printmaking. Urushibara was undoubtedly the most sophisticated and technically advanced of those at work on multiple colour block printing in England soon after the turn of the century and he assisted a number of the leading British printmakers including both Sir Frank Brangwyn and Sir George Clausen with their prints in this medium.

Urushibara is best known internationally for his complex colour woodcuts of flowers. The elaborate and elegant patterns formed by arrangements of flowers and the multiple shades of colours which they display, combine to make both the preparation and printing of these images something of a technical feat, requiring consummate skill and considerable planning in their creation. Each print is made from numerous blocks, each block printing a separate colour, only white being produced by the unprinted areas of paper. The blocks are printed in a superimposed manner, the subtle blending of inks which they carry combining to produce the full range of colors desired.