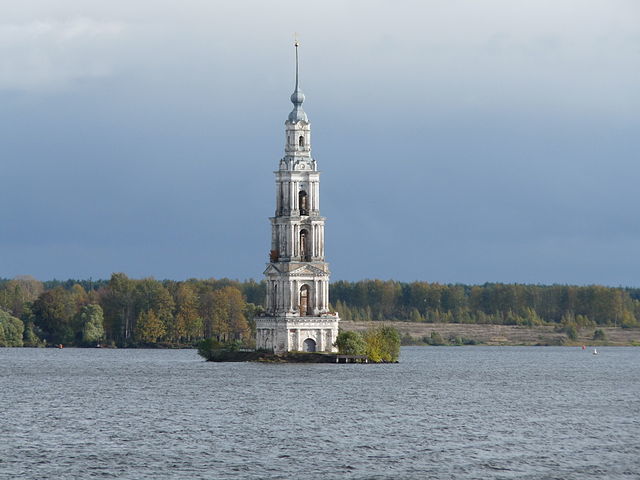 When reservoirs are created, they come at a cost that isn’t just natural and environmental, but social and cultural as well, especially in areas where settlement is well-established. The landscape is irreparably altered. Because of the fluctuations inherent in reservoir due to the controlled storage and release of water, remnants of the previous landscape occasionally re-emerge to remind us of its existence: a building foundation, an old roadbed, old artefacts buried seasonally by water. In most modern projects, the reservoir bed is cleared away prior to dam construction. In other cases, it isn’t cleared, and everything is swallowed by the rising waters as it stands. Such was the case in 1939 when Stalin ordered the construction of a hydroelectric reservoir on the Volga River, one of what would be many on a river that soon became essentially a chain of man-made lakes. Among the towns swallowed in part or in whole by the new Uglich Reservoir was the old city of Kalyazin. Dating back at least to the 12th century, the city contained many impressive structures of historical value (some of which escaped the flood and are still in use today).The most prominent of these was the Saint Nicholas (Russian Orthodox) Church, constructed in 1696. The church is the most recent edifice on a site, Nikolo-Zhabensky (St. Nicholas-on-Zhabna) that had been in religious use as a monastery since the 11th century.