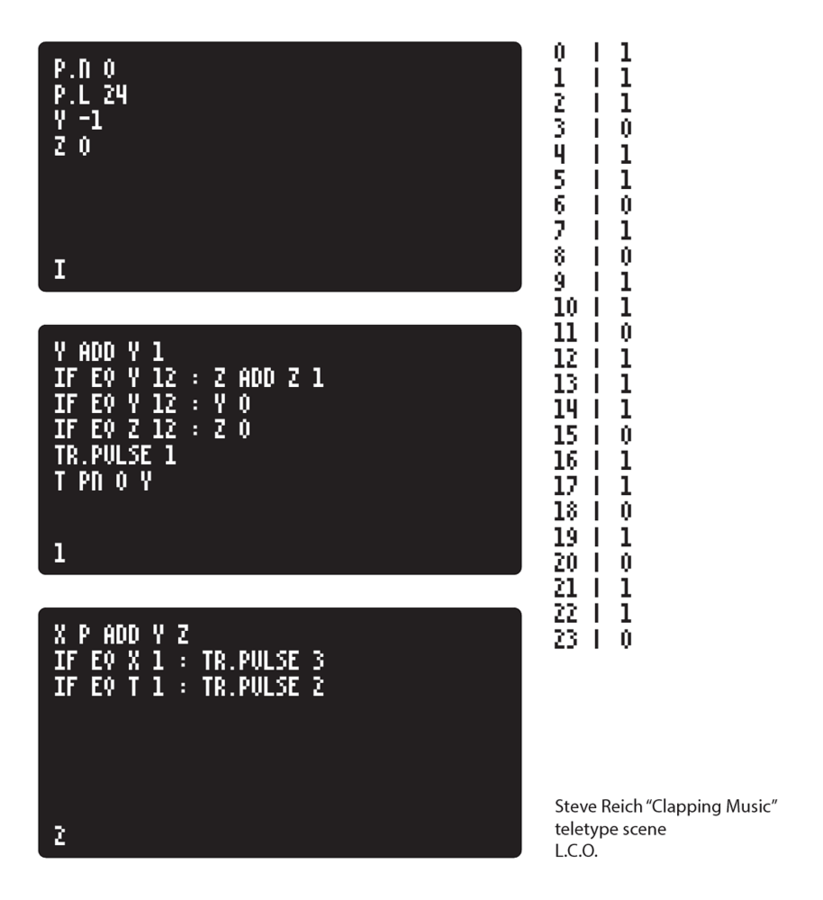 PATTERN:
I set up the pattern as 24 steps, which is an equivalent of two identical bars from the “Clapping Music” (see here: http://www.music.mcgill.ca/~gary/306/week10/clapping.pdf 18 ) You will see that steps 0-11 are the same as steps 12-23. I set this up this way so that I can use the same pattern for the two sequences that constitute the composition. (Short explanation of the structure of the piece is that one sequence repeats the same bar consistently, while the other shifts forward by one step until it reaches the full cycle of 12 shifts and begins to play the same sequence as sequence 1, and the cycle begins again. Here is a visual representation of the two cycling patterns as two rotating discs: https://upload.wikimedia.org/wikipedia/commons/0/07/Steve_Reich_-_Clapping_Music_visualization_disks.png 26 )

SCRIPT I:
This is the “Initializing” script that is automatically executed when the scene is loaded. essentially set up as a “starting point” or a kind of reset for the piece. This can be manually executed by pressing the “widows” + I on the keyboard at any time to restart the piece.

SCRIPT 1:
Most of what happens in this script is two counters (Y and Z) that are advancing the steps in the two sequences.

Y ADD Y 1 — using the ADD arithmetic operator it simply adds 1 to whatever the current Y count is, each time this script is executed, which is every time it receives the external clock trigger on INPUT 1.
IF EQ Y 12 : Z ADD Z 1 — an IF modifier checks whether the Y count had reached number 12, and IF it did, it advances the count of variable Z by adding 1 to it’s current count. So, each time a complete sequence of 12 steps is counted on Y, it advances Z by 1.
IF EQ Y 12 : Y 0 — and, when the count of Y reaches 12, it also resets Y back to 0.
IF EQ Z 12 : Z 0 — and the same for variable Z: if it reaches 12, it is reset back to 0.
TR.PULSE 1 — sends a pulse out of trigger OUTPUT 1 which is connected (self-patched) to INPUT 2 on teletype. (This is basically my way of extending this script beyond the 6 lines limit. The content of SCRPT 2 could have easily been sitting in SCRIPT 1.)
T PN 0 Y — sets up variable T which is set to either a 1 or a 0. Using the PN command, it looks at pattern 0, and checks the index position Y (which is a continuous count from 0 to 11).