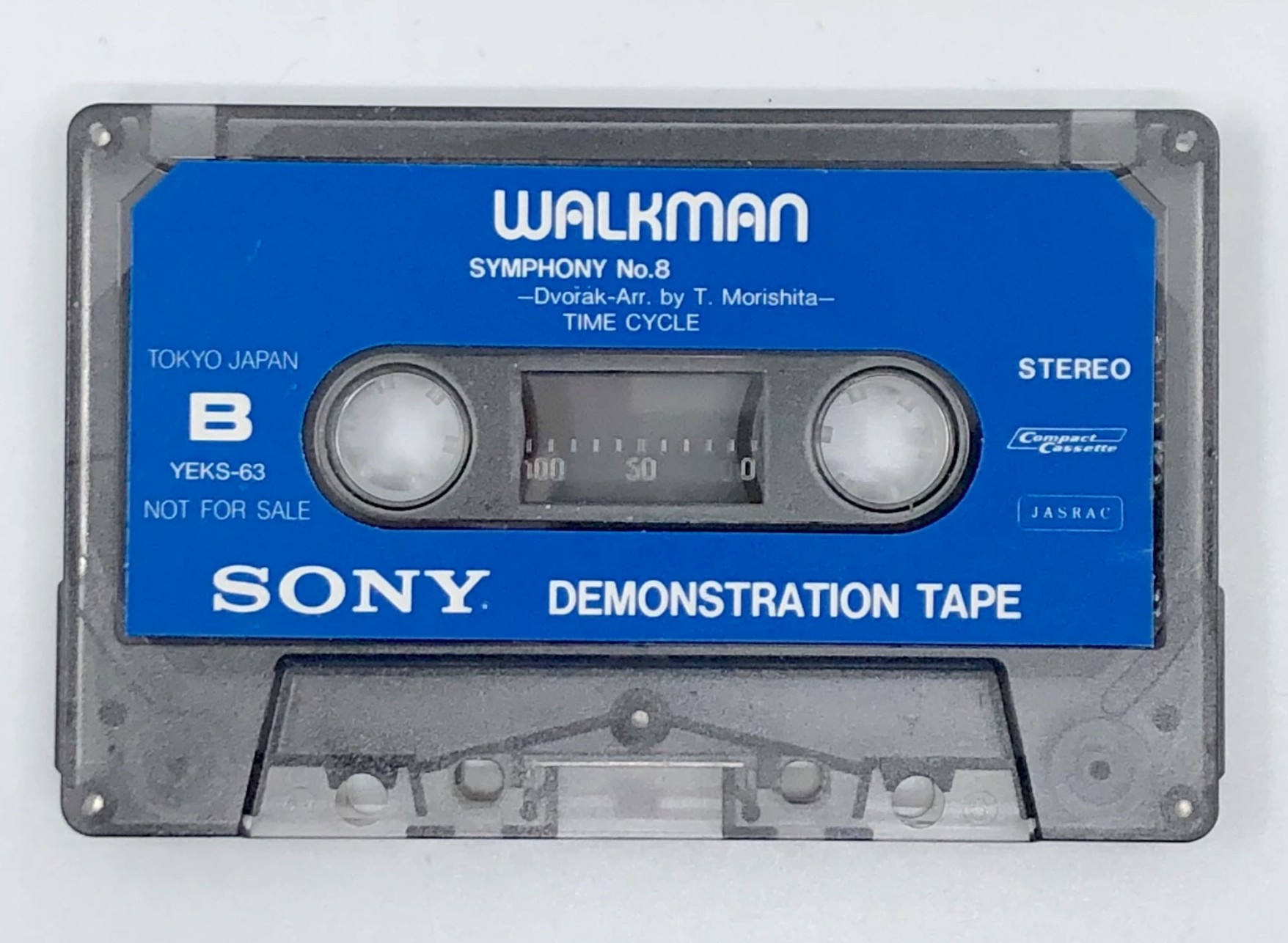 WM-F107
The famous “Solar Walkman” was indeed a technological marvel. Not only was this model solar powered, it was also exceptionally compact and fully featured, including auto reverse, metal tape compatibility, Dolby B NR, AM/FM stereo radio and a waterproof “sports” case.

Sony had made a solar battery charger for their “AA” sized nickel cadmium batteries some years before, but the WM-F107 took the concept a stage further. The amount of power required to run a quality cassette player is not inconsiderable, so it was necessary for the WM-F107’s solar panel to cover more than half one side of the machine. A glance at the styling would suggest that the panel was mounted on the cassette door, though this is not the case. It is in fact mounted on what would normally be considered as the back, though since the casework is styled on all faces, this is not such a drawback. The only oddity it caused was that when the cassette player was being used in the sun it would effectively be upside down.

Even the large solar panel fitted to the WM-F107 was not powerful enough to run the cassette player directly. It could run the radio fully if the sun was bright enough, but for cassette listening the built-in rechargeable battery was required. Leaving the machine in the sun for a few hours would charge the battery enough for the cassette to work. The battery was of the type used in later slimline Walkman models and was similar in size and shape to a couple of sticks of chewing gum. It was housed in the rectangular bulge next to the tape transport buttons and the volume control, and despite being used in decidedly non-ideal conditions (charging when hot, only rarely being fully charged, being completely discharged frequently) the quality of construction meant that the service life was quite reasonable. Nearly twenty years on, some are still functioning. The battery was soldered in place and no hatch or door was provided for user access, so it could only be replaced by a Sony workshop.

As if solar power were not enough, the WM-F107 was also exceptionally small. It used a finely crafted precision mechanism with many beautifully cast and highly polished parts visible when the cassette door was opened. The spool carriers had metal trims embossed four times on each with the Sony logo, similar to those fitted to the WM-10, though there were no real mechanical similarities between the two models. Because the casework was sealed to make it water resistant, some of the minor controls were fitted inside next to the tape deck. These took the form of three tiny green levers, which controlled the tape type (normal/metal), Dolby B NR and reverse mode.

The radio was mounted completely in the cassette door and was controlled by two small levers (tape/radio/FM stereo and AM/FM) and a tuning wheel. The tuning scale was tiny and placed on the upper edge of the cassette door. Some versions included a VHF TV sound band, though this did not function in the UK as broadcasts of this type are not made here. The presence of the radio circuit meant that a generous cassette window was not practical, so instead a small viewing hole was provided, above one of the spools. This was the only way to determine the direction of tape travel, and to aid this the spool was painted with white lines and two arrows with “FWD” and “REV” were printed on the outside.

As the auto reverse system was controlled electronically, a push button switch was used to reverse the tape transport during play. This was sealed by its own rubber cover and mounted just above the volume control. Also in this area was the single headphone socket and an LED indicator to show that the tape was running. Another LED next to the solar panel lit when sufficient light was present to charge the battery or operate the radio.

It was clearly realised that the solar panel was not a completely practical way of powering a personal stereo, and so to avoid the WM-F107 from being reduced to a novelty that was usable in the summer months only, an extra battery holder was included with each machine. This screwed to the cassette door and contained a single “AA” size cell. Plugging this in disconnected the solar power section completely, though the solar cell could still recharge the built-in battery. The cap of the battery holder was sealed with an O-ring so that it was just as water resistant as the main unit.

The WM-F107 was quite expensive and only sold in limited numbers. Having produced it, Sony did not see fit to repeat the exercise, and there has not been a solar powered Walkman since.