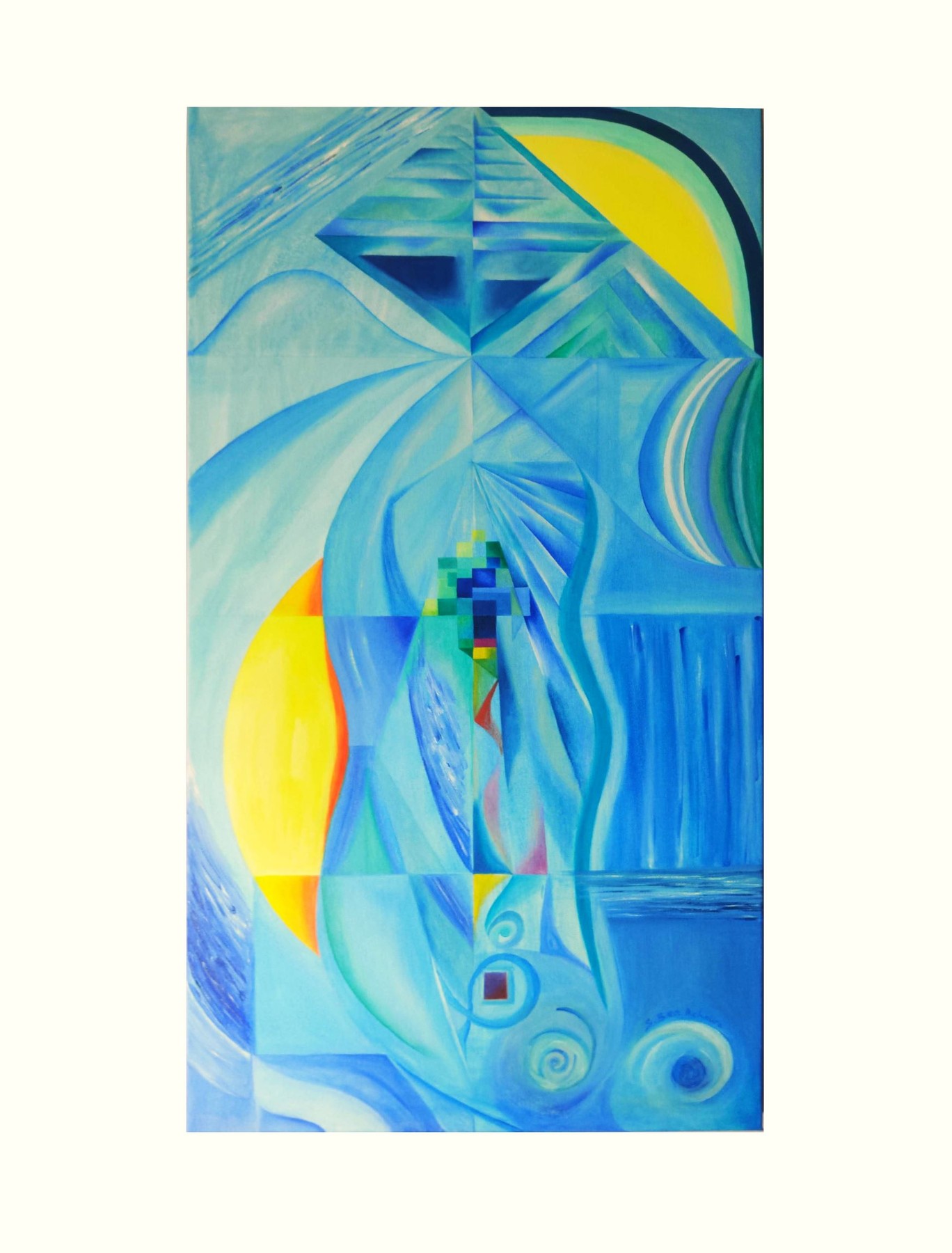 'The Last sunset'
Oil on canvas

Artist Statement
I have been painting intensely during the lockdown. I have created very different new paintings. The most striking is The Last Sunset- see attached in my application. I wrote a poem alongside the painting. It is reminiscent of Atlantis, the myth of the advanced civilization that was destroyed as a result of its own greed and corruption by natural forces. History seems to be repeating itself. Humans are being warned of a second potential apocalyptic ending. Will they listen? Technically, this painting incorporates angles and curves in innovative ways. It opened up many new opportunities to push these initial ideas further. Colour is shaped for the image to appear as a luminous apparition. I would like to develop this initial painting further and create a new painting based on this concept.

Poem
The human mind and its radiant energy
Permeates the planet.
A mind with the highest potential,
Yet every sunset holds its dystopian latency.
In its breath-taking beauty,
A city is engulfed by the ocean.
The reminder of an ancient myth,
The final days of Atlantis,
An civilisation that, at its peak,
Succumbed to greed.
Its final sunset may have been the most beautiful of all.
A new dawn, a new era.
Civilization celebrates its twenty-first anniversary,
But the hope of a better ending wanes,
As the human colony hangs by a thread.
Will it be engulfed yet again?
Will its light fade?

Curatorial note
Artists are often sensitive to the layers of myth and story and how these unconsciously shape the landscape of our thinking, even if half forgotten in our present era. Sonia’s engagement with the myth of Atlantis through poetry and through beautiful abstract form reflects strongly on the precariousness of our own civilisations unless rapid, systemic changes occur. Science is speaking loud and clear that a series of feedback loops and tipping points in the earth’s life supporting systems could very soon result in things like ‘run away climate change’ that would spell the collapse of our civilisations. We have noticed that many people, regardless of whether or not they identify as ‘environmentalists’ or ‘progressives’, are talking about this moment of lock-down, this unique moment off the treadmill, as our last chance to change the system, our last to consciously change course towards a liveable future.