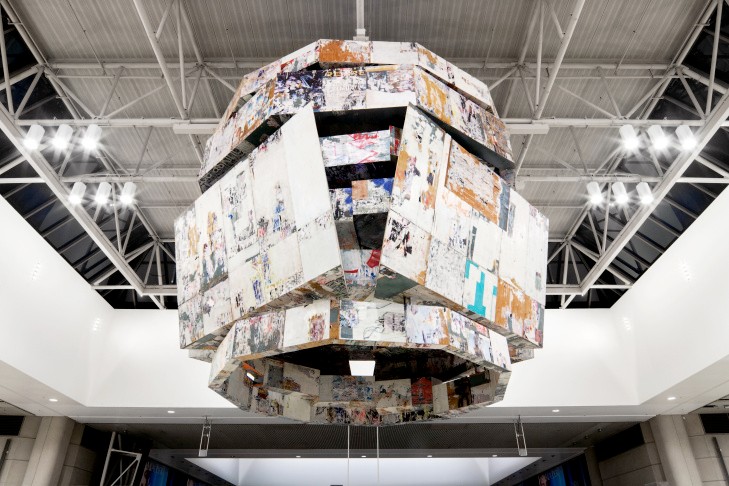 Another commission is from L.A. artist Mark Bradford, whose piece is a colossal, twelve-and-a-half-thousand-pound mix of salvaged plywood and weathered posters he found at construction sites all over L.A. Called the “Bell Tower,” it hangs like a bulky chandelier over the TSA screening area.

According to Bradford, there were some logistical challenges in getting the piece installed, like having to apply a fire-retardant coating to the piece.

“The craziest thing was getting it through the door,” Bradford says. “The sheer volume of it. I mean really, over TSA. It’s like a flying saucer floating over TSA.”

Bradford says he wants the piece to serve as a respite for passengers as they’re asked to take off their shoes, drop their belongings in bins and prepare for a full-body scan.

“I wanted them to feel the idea of an urban environment,” he says, “but also those small little moments when you’re walking down a street and you run into a little doorway when it’s raining or something, and you’re sitting there and you’re involved in this urban environment, but you have this little space that’s safe and it’s yours.”