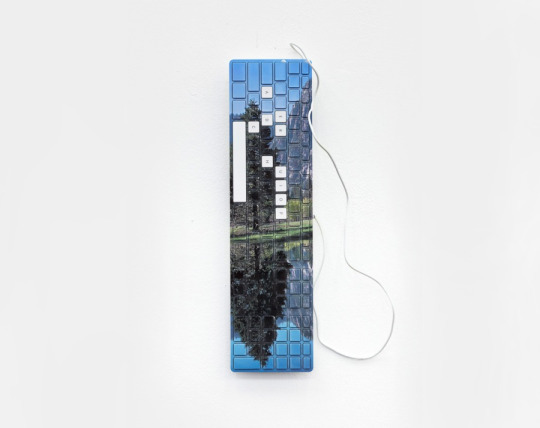 Like Insects Smacking Themselves Senseless Against a Screen at Night to Get to the Light Inside [18 Nov – 22 Dec 2016 . Supportico Lopez]

‘In a new series of works, Hoff paints stock images from Yosemite State Park onto computer keyboards. Hoff chooses Yosemite because of its use by Apple as the name for a version of its operating system choosing images that are typical of the desktop wallpaper genre. In so doing, he documents the appropriation of the images and names of natural sites and phenomenon by computer and software manufactures for programs that contour our lives and actions within an endless, abstract digital landscape. The keyboard, takes on a special role within this landscape as a linguistic nexus between our analogue and digital realities. Each keyboard within this series has image-less keys/letters that spell out a phrase as if they were keyed in, thereby taking on the role of code or cypher. Phrases such as “Snorting Data,” “Delinquent Pornography,” “Euphoria Headache,” and “21 Days a Week” reflect on the uncomfortable fissures between our analogue and digital lives with poetic wit and humor. These works remind us that behind every digital image, lies a mountain of language, code.’