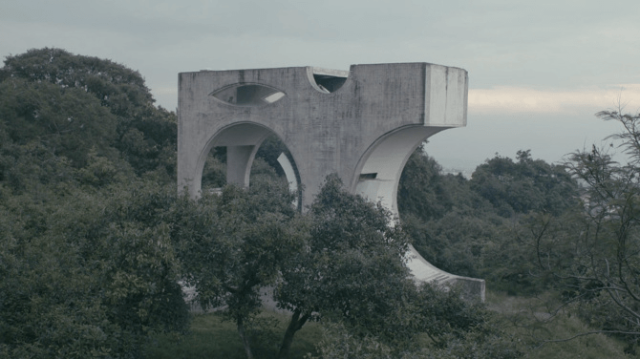 Abandoned Centro de Meditación in Santa María Ahuacatitlán, Mexico in summer 2015. Designed and developed by Agustín Hernández (b. 1924) in 1986 as a center for meditation, the utopian building represents a rich interface of pre-Columbian symbology and futuristic elements of the postmodern. Located on a site chosen by the architect for its energetic interaction with key locations in the region such as Tepoztlán, Cholula, and Malinalco, the iconic building’s derelict state lends it an anthropological quality, fostering local myths, and allowing surreal and esoteric narratives to emerge. Filmed on location in Santa María Ahuacatitlán, Tetela tells the story of two young boys who stumble upon the Centro's ruins and unusual situation crafted there by García Torres. Throughout the film, the context and the site itself create a space for reflection – a museum of sorts where human gestures and nature’s intervention blur their own realities. Thoughts of a failed utopia shape a subtle illusionary fusion of the past and what is still to come.