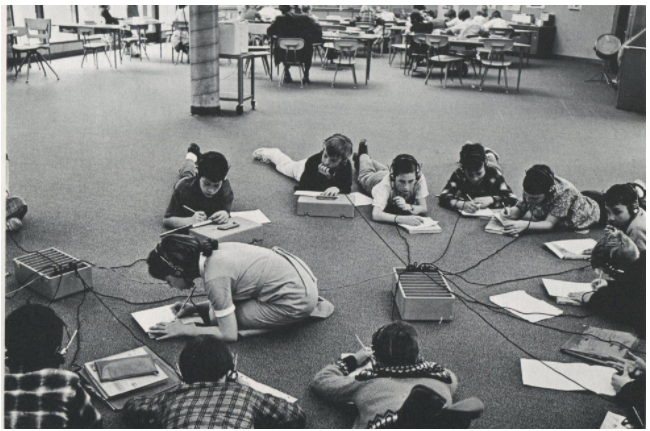 A research exhibition and a symposium, Learning Laboratories: Architecture, Instructional Technology, and the Social Production of Pedagogical Space Around 1970 sets out to reconstruct educational imaginaries—the past’s conceptions of the future of education—in an archaeological excavation of learning spaces and knowledge environments of the 1960s and 1970s. In stark contrast to the present condition of crisis in education— one defined by containment and separation, extreme economization and commodification, neoliberal managerialism and an “outcome”- oriented fetishization of measurability—the architectural programs and educational research around 1970 gave rise to a number of experimental building principles and pedagogical ideals such as the “comprehensive school,” the “open plan school,” and “schools without walls.”

Through a number of selected case studies in the edu-architectural design and learning technologies of the period, Learning Laboratories explores the experimental embodiment of several spatio-pedagogical ideologies, opening out to developments in educational design, politics, and psychology. In different ways, the exhibition revisits the attempts in education to cope with the economic and demographic realities ushered in with the post-war generation. It offers diverse readings along the entangled layers of (geo)politics, urban planning, educational science, learning technology, and architecture, presenting a resource for the contemporary predicament and possibilities to learn otherwise.

The case studies include, among others: the Laboratory School and the Oberstufen-kolleg, Bielefeld, both based on concept of the “de-schooled school” (research prepared by Gregor Harbusch); televisual education—otherwise known as “tele-learning”—developed in Ivory Coast with the aim of drawing rural populations into the educational system; the extraterritorial “pilot schools,” and the nomadic schools carried through the Liberated Zones by guerrilla fighters in the anti-colonial liberation wars in Guinea- Bissau, presented here by Filipa César and Sónia Vaz Borges. The exhibition also comprises works by: Hartmut Bitomsky and Harun Farocki; Darcy Lange; Wendelien van Oldenborgh; and Florian Zeyfang, Alexander Schmoeger, and Lisa Schmidt-Colinet. These works explore through photographic, video, and written materials various learning processes, technologies, and facilities from a range of contexts in Germany, the United Kingdom, the Netherlands, and Cuba. An extensive research library containing journals, books, and planning manuals published between 1960 and 1980, including various printed reports of Educational Facilities Laboratories, Schulbauinstitut der Länder (Federal Institute for School Architecture), and Informatiecentrum voor Scholenbouw (Information Centre for School Architecture), discloses the research material of the exhibition itself.

Learning Laboratories is conceptualized by Berlin-based curator and writer Tom Holert and has been made possible by financial support from the City Council of Utrecht and the Ministry of Education, Culture and Science of the Netherlands. The exhibition is designed by Kooperative für Darstellungspolitik, Berlin and realized in collaboration with Haus der Kulturen der Welt, Berlin and the Harun Farocki Institut, Berlin.