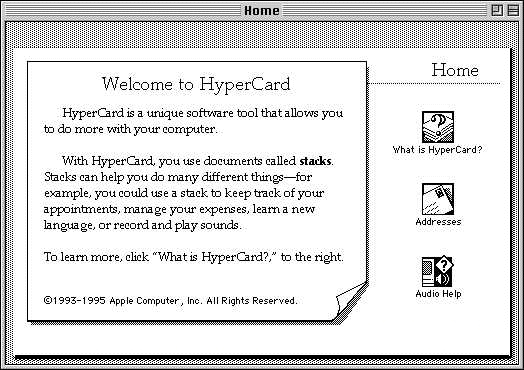 Hypercard, created by Bill Atkinson for Apple in 1987, originally was built as a graphic programming environment. It became the first successful hypermedia systems that was created before the World Wide Web.

HyperCard is based on the concept of a "stack" of virtual "cards". Cards hold data, just as they would in a rolodex. The layout engine was similar in concept to a "form" as used in most Rapid Application Development (RAD) environments (such as Borland Delphi or Visual Basic). A special "Home" stack (precursor to the home page on a website) was available as an application launcher, a repository for shared scripts, and a facility for setting preferences.

HyperCard is not only a database system. The layout of each card could be unique, just as one can write additional non-standard information on a Rolodex card. A special background layer contained elements that appeared on all cards of that stack or on all cards grouped under a certain background. Backgrounds could include pictures (its original purpose, "background picture"), in addition to the objects also available for each card: fields; buttons; (static) text; (editable) text fields; and other common GUI elements. Each card then could contain different data in the text or picture fields, as in a database.