Are.na
PricingExamplesBlogLog in
Log in
Notes on Blocks
On Indexing
March 11, 2021
Ritu Ghiya
This piece came out of a new event series called “Are.na Walkthroughs” in which we ask people to take us through a particular channel, the blocks and ideas held within, and the ways those ideas may have evolved as the channel has grown and accumulated. Our first one was on February 12 over Zoom, and it featured Kai Jenrette, Taulant Sulko, Ritu Ghiya, and Emily Nabnian. Here, Ritu shares some of what she talked about while walking us through her channel “walking taxonomies ヽ｀、.”
I started the channel “walking taxonomies ヽ｀、” two summers ago when I was living in Ridgewood, Queens. I had just left a tiring job, so I had a lot of free time. I ended up walking around for hours every day taking photos and thinking about art and subjectivity. Lost in my thoughts, I wanted to make sense of the world by imagining a fantasy-taxonomy of what I saw while walking, inviting others to do so too.
At that time, I was re-reading Sara Ahmed and was struck by the quote here, as I was also simmering in a repetition of “repetition.” By walking the same route around my apartment everyday, I was in a choreography and repetition of noticing and collecting, and in solitude ordaining myself to a new life of noticing, arriving to a whole new self I didn't recognize.

from sarah ahmed’s “orientations: toward a queer phenomenology” - “i have always been struck by the phrase ‘a path well trodden’ a path is made by repeatedly passing over ground. we can see the path as a trace of past journeys, made out of footprints, traces of feet that tread and in treading create a line on the ground. when we see the line of the ground before us, we tend to walk on it, as a path clears the way. so we walk on the path as it is before us but it is only before us as an effect of being walked upon. the lines that direct us, as lines of thought as well as lines of motion, are in this way performative: they depend on the repetition of norms and conventions, of routes and paths taken, but they are also created as an effect of this repetition. to say that lines are performative is to say that we find our way, we know which direction we face, only as an effect of work, which is often hidden from view. so in following the directions, i arrive, as if by magic.”

The early photos in this channel are of signs in Ridgewood, but over the past 2 years, I’ve gotten really into graffiti. I feel pretty mesmerized with the portals that graffiti opens. How did this tag get all over Manhattan in a week? How many people saw this too? Etc., etc. This is periwinkle + beige graffiti on a subway stop. 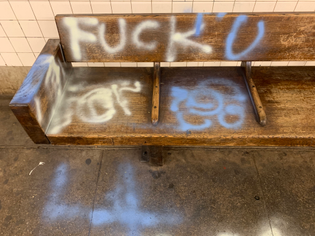 img_3608.jpg
This channel gives me a lot of joy because it’s a corner of the Internet where I collect memories outside of how I usually fetishize + overthink images online. This is a delivery bike decal in Bushwick. The photo makes me think a lot about personal adornments to objects tied to labor. I also really love the melding of masculinity + kawaiiness—cute lime green bulbous bike paired with the bull skull flame head. It felt really satisfying and sublime to see. 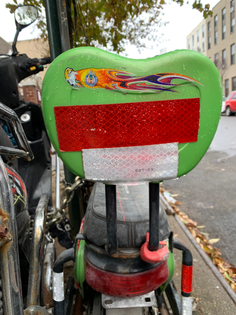 img_6178.jpg
I started asking people I knew to contribute to this channel, and I really enjoyed seeing what they added. Kino-eye comes to mind when I scroll down this channel; there’s an element of collecting street photography like this that defies authorship, and moreover tries to create a new dialect for seeing multiplicity in what’s around us. It also points to a vernacular where we the collective are trying to re-imagine our pre-destined habitat by how we perform and decorate ourselves. Thinking about projects like Shanzhai Lyric here.

b4c52c02-b24c-4820-8f0d-885c2b409109.pn
And lately, this archival impulse has led me to see graffiti, decals, signs, shirts as a sort-of folk art. I got this vocabulary from books like Hardworking, Goodlooking’s Filipino Folk Foundry and this book my friend Chuck lent me documenting signs in Taiwan (title translated to Glyph Walking in Taiwan: Observation of Words on the Road). Although I see this collection going in this direction, I'm left still wondering, what is a taxonomy? Who does it belong to? When is it done? When is it started? 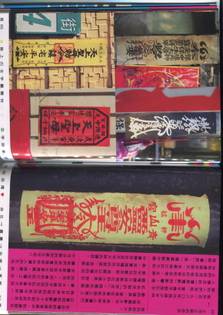 scan from Taiwanese book (translated as…
Are.na Blog
Learn about how people use Are.na to do work and pursue personal projects through case studies, interviews, and highlights.
See More
You can also get our blog posts via email
About Are.na
Extended Are.na
Editorial
Info