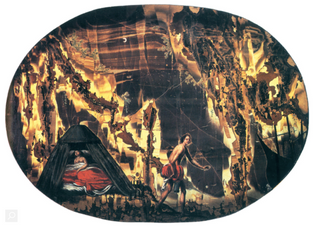 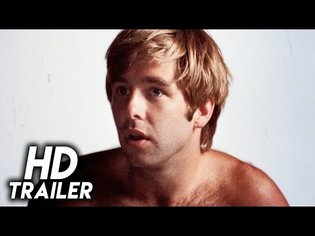 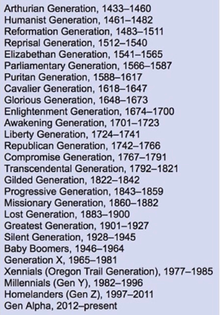 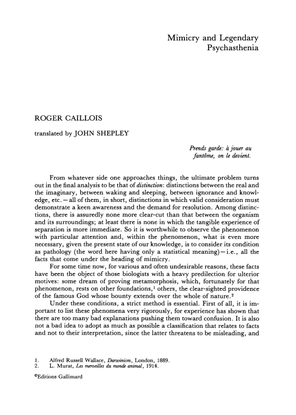 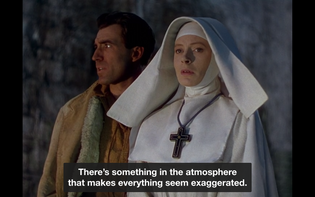 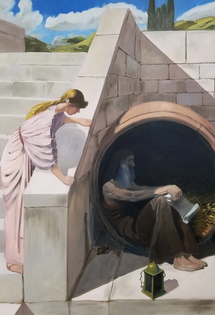 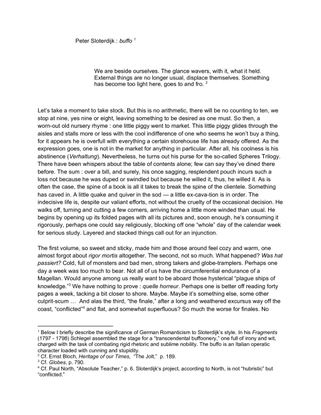 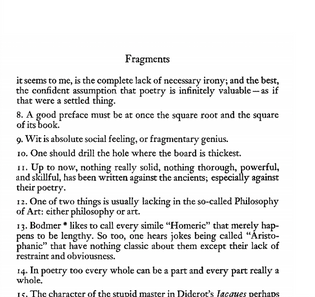 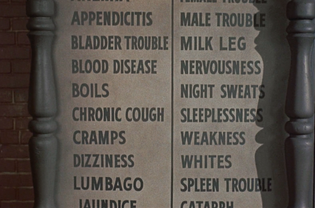 Always more slowly ahead. – Running on the street has the expression of terror. The fall of the victim is imitated in the very attempt to escape the fall. The posture of the head, which would like to remain raised, is that of someone who is drowning, the tense face resembles the grimace of torture. They must look straight ahead, cannot even glance back, without stumbling, as if the pursuer [Verfolger: follower, persecutor] whose sight would cause them to freeze were breathing down their necks. Once one ran from dangers which were too desperate to stand and face, and those who are running after a bus speeding away still testify to this, without knowing it. The flow of traffic no longer has to reckon with wild animals, but at the same time it has not pacified running. This last estranges the bourgeois walk. The truth becomes apparent, that something is not right about security, that one must constantly evade the unrestrained powers of life, even if these are only vehicles. The body’s habit of walking as something normal stems from the good old days. It was the bourgeois manner of getting somewhere: physical demythologization, free from the bane of the hieratic step, the homeless fellowship of the road, the breathless flight. Human dignity insisted on the right to the gait, a rhythm not drilled into the body by command or terror. Going on promenades, being a flaneur were private ways of spending time, the legacy of the feudal pleasure-jaunts of the 19th century. Walking is dying out along with the liberal epoch, even where autos are not being driven. The youth movement, which groped for such tendencies with unmistakable masochism, challenged the parental Sunday excursion and replaced it with the voluntary march of power, which they christened with the medieval name of trip [Fahrt: journey, travel], while the Ford model quickly became available to the latter. Perhaps the cult of technical speediness, just as in sports, conceals the impulse of mastering the terror of running, by turning it away from one’s own body and at the same time high-handedly outbidding it: the triumph of the increasing mile-marker ritually attests to the fear of being pursued. Whenever however human beings are told: “run,” ranging from the children, who are supposed to fetch the mother a forgotten handbag from upstairs, all the way to the prisoners, who are commanded by their escorts to flee, in order to have a pretext for murdering them, then the archaic violence becomes audible, which otherwise inaudibly directs every step.