The media society of the future will not be the "global village" McLuhan dreamed of, but rather a "global city" in Aristotle's sense. Thus, the museum of the future will be a place which various cultures, religions, and ethnicities share-a place of variety, strangeness and singularity all at the same time-an intercultural heterotopia. In this future museum landscape there will be no monopoly of the modern, but rather a multiple modernity, asynchronic history and communication, all of which allow us to recognize that different peoples had different stages of development at different times, which reappear in other cultures in other times. We are thus living in a period of asynchronic cultural developments which we may not divide into "underdeveloped" and "highly developed" cultures; we are dealing instead with multiple modernity, a concept which exposes the North American/European monopoly on the modern as a colonial phantasm. The future task of the museum in this global media world will be to do just that which is required in such a world, namely, to facilitate intermediation and transfer.

The popularity of the museum today is certainly not due to its having deviated from constitutive production, namely, the production of foreignness. It is much more the case that visitors who voluntarily visit the museum on public holidays, have chosen to do so because of the unpredictability or incalculability of that institution. The museum of the future can thus be understood to be an unpredictable, incalculable, high-risk but risk-loving institution.

In accordance with observation theories and second-order observation processes such as those described by Heinz von Foerster, but also in the sense of Niklas Luhmann, it is evident that the artist is no longer the sole author of his/her work of art. An artist is only one actor out of many other actors of equal worth in the social field of culture. When I use the term "actor", I refer to the sociological models proposed by Bruno Latour, Michel Calion, and John Law, according to which culture is created via translation process from a techno-economic social network.

Returning to the issue of the museum and the problem of art and the masses, the solution thus lies in interactivity, that is, in the direct involvement of the visitor in the cognitive process as well as in intercultural relations.

The museum has slowly discarded its reputation of being an archive for dead things or, as Paul Valéry suspected, an instance of suffocated life. The concept of the museum has changed: it is no longer a place of quiescent time, but rather a place of events.

To put it concisely, the legitimacy crisis serves a purpose, namely, to justify the pressure put on museums to achieve quotas. And the crisis of competence, in turn, serves the purpose of legitimising incompetence. Both, in the opinion of this author, are failed strategies to find a solution to one of the most pressing problems of the 21st century, namely, the relationship of art to the masses.

<b>What is the Crisis of Competence?</b>
For quite some time now Western societies have found themselves in a crisis of representation which manifests itself in art, politics and other fields. The rise of abstract art in the 20th century-which virtually severed all ties between the world of objects and their pictorial representation became the visual symptom of this crisis. The crisis, in turn, was further aggravated by this exit from the picture-world. 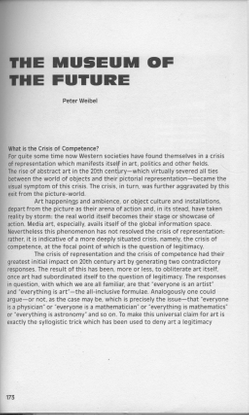