Notes on flora, fauna and natural phenomena sighted near you.
Feel free to add your own sightings or some resources you find useful for those who want to take similar notes.
Most recently, poetry. 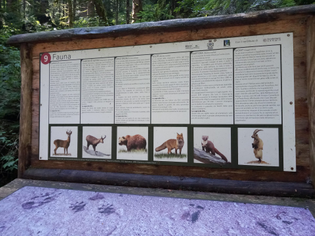 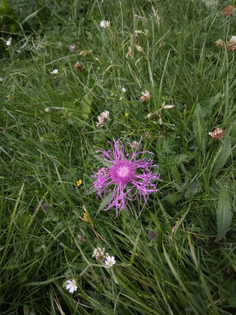 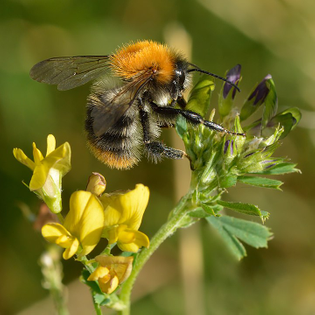 The Silence of Plants

A one-sided relationship is developing quite well between you and me.
I know what a leaf, petal, kernel, cone, and stem are,
and I know what happens to you in April and December.

Though my curiosity is unrequited,
I gladly stoop for some of you,
and for others I crane my neck.

I have names for you:
maple, burdock, liverwort,
eather, juniper, mistletoe, and forget-me-not;
but you have none for me.

After all, we share a common journey.
When traveling together, it's normal to talk,
exchanging remarks, say, about the weather,
or about the stations flashing past.

We wouldn't run out of topics
for so much connects us.
The same star keeps us in reach.
We cast shadows according to the same laws.
Both of us at least try to know something,
each in our own way,
and even in what we don't know
there lies a resemblance.

Just ask and I will explain as best I can:
what it is to see through my eyes,
why my heart beats,
and how come my body is unrooted.

But how does someone answer questions
which have never been posed,
and when, on top of that
the one who would answer
is such an utter nobody to you?

Undergrowth, shrubbery,
meadows, and rushes…
everything I say to you is a monologue,
and it is not you who's listening.

A conversation with you is necessary
and impossible,
urgent in a hurried life
and postponed for never.

The Silence of Plants

In joyous Summer, when the exulting earth
Flung fragrance from innumerable flowers
Through the wide wastes of heaven, as on she took
In solitude her everlasting way,
I stood among the mountain heights, alone!
The beauteous mountains, which the voyager
On Hudson's breast far in the purple west
Magnificent, beholds; the abutments broad
Whence springs the immeasurable dome of heaven.
A lake was spread before me, so serene
That I had deemed it heaven with silver clouds,
Had not the drowning butterfly, or wing
Of skimming swallow, ever and anon
Wrinkled its glorious face with spreading rings.
It was Earth's offering to the imperial sky
That in their rugged palms the mountains held
Aloft. Around it rose precipitous steeps,
With rock, and crag, and dell, and cavern dank;
Which seemed an amphitheatre hugely built
By mighty Titans when the world was young;
And though the Flood o'erwhelmed the builders, hurled
Downward its loftiest battlements, and crushed
The massive seats, columns and arches vast;
Silent and desolate, it rears on high
A thousand Colosseums heaped in one!
Forests of shadowy pine, hemlock and beech,
And oak and maple ever beautiful,
O'er every rent and boss of ruin spread,
Rank above rank arrayed: the topmost pines
Quivered among the clouds, and on the lake,
Peaceful and calm, the lower woods looked down,
A silent people through the lapsing years.

Beside that lake I lingered long, like one
Who gazes on the face of her he loves,
Entranced in thoughts too glad for utterance.
I watched the breeze upon the mountain's breast
Toss the green pine and birchen foliage gray;
The clouds, like angels on their heavenward flight,
Inhaled the perfume from the azalea's flower,
And small white violet, whose honied breath
Made the air sweet, and marked the wavelets break,
Casting the pollen of the rifled flowers
In mimic rage, like gold-dust, on the shores.
The sun descended, and the twilight spread
Its soft empurpled wings; and that blessed hour,
When spirits stooping from the crimson clouds
Commune with man, whose grovelling instincts now
Are laid aside as robes of earthliness
By Nature's pure and solitary fount.

Over my senses stole a sweet repose,
And dreams, which are but wakefulness of soul —
A brief exemption from encumbering clay.
I heard a sound! 'T was wild and strange; a voice
As of ten thousand! Musical it was
A gush of richest concord, deep and slow;
A song that filled the universal air!
It was the voice of the great Forest, sent
From every valley and dark mountain top
Within the bosom of this mighty land.

Mortal, whose love for our umbrageous realms
Exceeds the love of all the race of man;
Whom we have loved; for whom have opened wide
With welcome our innumerable arms;
Open thine ears! The voice that ne'er before
Was heard by living man, is lifted up,
And fills the air — the voice of our complaint.
Thousands of years! — yea, they have passed away
As drops of dew upon the sunlit rose,
Or silver vapors of the summer sea;
Thousands of years! like wind-strains on the harp,
Or like forgotten thoughts, have passed away
Unto the bourne of unremembered things.
Thousands of years! When the fresh earth first broke
Through chaos, swift in new-born joy even then
The stars of heaven beheld us waving high
Upon the mountains, slumbering in the vales:
Or yet the race of man had seen their light,
Before the virgin breast of earth was scarred
By steel, or granite masses rent from rocks
To build vast Thebes or old Persepolis,
Our arms were clasped around the hills, our locks
Shaded the streams that loved us, our green tops
Were resting places for the weary clouds.
Then all was harmony and peace; but M AN
Arose — he who now vaunts antiquity —
He the destroyer — and in the sacred shades
Of the far East began destruction's work.
Echo, whose voice had answered to the call
Of thunder or of winds, or to the cry
Of cataracts — sound of sylvan habitants
Or song of birds — uttered responses sharp
And dissonant; the axe unresting smote
Our reverend ranks, and crashing branches lashed
The ground, and mighty trunks, the pride of years,
Rolled on the groaning earth with all their umbrage.
Stronger than wintry blasts, and gathering strength,
Swept that tornado, stayless, till the Earth,
Our ancient mother, blasted lay and bare
Beneath the burning sun. The little streams
That oft had raised their voices in the breeze
In joyful unison with ours, did waste
And pine as if in grief that we were not.
Our trackless shades, our dim ubiquity,
In solemn garb of the primeval world,
Our glory, our magnificence, were gone;
And but on difficult places, marsh or steep,
The remnants of our failing race were left,
Like scattered clouds upon the mountain-top.
The vast Hyrcanian wood, and Lebanon's
Dark ranks of cedar were cut down like grass;
And man, whose poets sang our happy shades,
Whose sages taught that Innocence and Peace,
Daughters of Solitude, sojourned in us,
Held not his arm, until Necessity,
Stern master e'en of him, seized it and bound,
And from extinction saved our scanty tribes.

" Seasons there were, when man, at war with man,
Left us to raze proud cities, desolate
Old empires, and pour out his blood on soil
That once was all our own. When death has made
All silent, all secure, we have returned,
Twisted our roots around the prostrate shafts
And broken capitals, or struck them deep
Into the mould made richer by man's blood.
Such seasons were but brief: so soon as earth
Was sanctified again by shade and art,
Again resolved to nature, man came back,
And once more swept our feeble hosts away.

" Yet was there one bright, virgin continent
Remote, that Roman name had never reached,
Nor ancient dreams, in all their universe;
As inaccessible in primal time
To human eye and thought, as Uranus
Far in his secret void. For round it rolled
A troubled deep, whose everlasting roar
Echoed in every zone; whose drear expanse
Spread dark and trackless as the midnight sky;
And stories of vast whirlpools, stagnant seas,
Terrible monsters, that with horror struck
The mariner's soul, these held aloof full long
The roving race of Europe from that land,
The land of beauty and of many climes,
The land of mighty cataracts, where now
Our own proud eagle flaps his chainless wing.

" Thus guarded through long centuries, untouched
By man, save him, our native child, whose foot
Disdained the bleak and sun-beat soil, who loved
Our shafted halls, the covert of the deer,
We flourished, we rejoiced. From mountain top
To mountain top we gazed, and over vales
And glimmering plains we saw our banners green
Wide waving yet untorn. Gladly the Spring
On bloomy wing shed fragrance over us;
And Summer laughed beneath our verdant roof,
And Autumn sighed to leave our golden courts;
And when the crimson leaves were strewn in showers
Upon the ample lap of Oregon,
Or the great Huron's lake of lazuli,
Winter upraised his rude and stormy songs,
And we in a wild chorus answered him.
O peace primeval! would thou hadst remained!
What moved thee to unbar thine emerald gates,
O mighty Deep! when the destroyer came?
Strayed then thy blasts upon Olympus' air,
Or were they lulled to breezes round the brow
Of rich Granada's crafty conqueror,
When with strong wing they should have rushed upon
Our enemy, and smitten him, as when
The fleet of Xerxes on the Grecian coast
Was cast like foam and weed upon the rocks!

" But impotent the voice of our complaint:
He came! Few were his numbers first, but soon
The work of desolation was begun
Close by the heaving main; then on the banks
Of rivers inland far, our strength was shorn,
And fire and steel performed their office well.
No stay was there — no rest. The tiny cloud
Oft seen in torrid climes, at first sends forth
A faint light breeze; but gathering, as it moves,
Darkness and bulk, it spans the spacious sky
With lurid palm, and sweeps stupendous o'er
The crashing world. And thus comes rushing on
This human hurricane, boundless as swift.
Our sanctuary, this secluded spot,
Which the stern rocks have guarded until now,
Our enemy has marked. This gentle lake
Shall lose our presence in its limpid breast,
And from the mountains we shall melt away,
Like wreaths of mist upon the winds of heaven.
Our doom is near: behold from east to west
The skies are darkened by ascending smoke;
Each hill and every valley is become
An altar unto Mammon, and the gods
Of man's idolatry — the victims we.
Missouri's floods are ruffled as by storm,
And Hudson's rugged hills at midnight glow
By light of man-projected meteors.
We feed ten thousand fires: in our short day
The woodland growth of centuries is consumed;
Our crackling limbs the ponderous hammer rouse
With fervent heat. Tormented by our flame,
Fierce vapors struggling hiss on every hand.
On Erie's shores, by dusky Arkansas,
Our ranks are falling like the heavy grain
In harvest-time on Wolga's distant banks.

" A few short years! — these valleys, greenly clad,
These slumbering mountains, resting in our arms,
Shall naked glare beneath the scorching sun,
And all their wimpling rivulets be dry.
No more the deer shall haunt these bosky glens,
Nor the pert squirrel chatter near his store.
A few short years! — our ancient race shall be,
Like Israels', scattered 'mong the tribes of men."

The Lament of the Forest 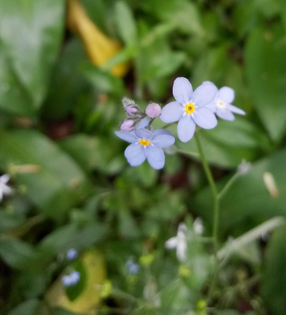 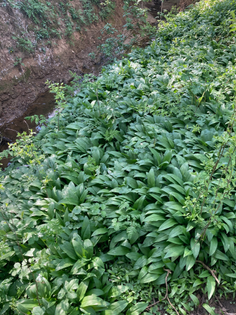 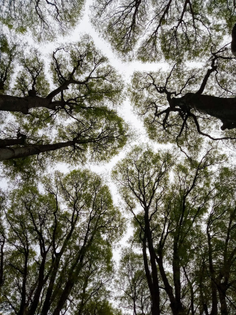 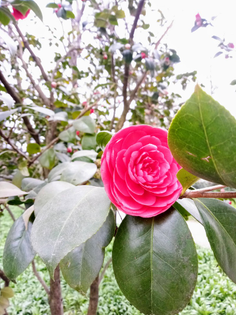