A large and endless volume of My Poetry 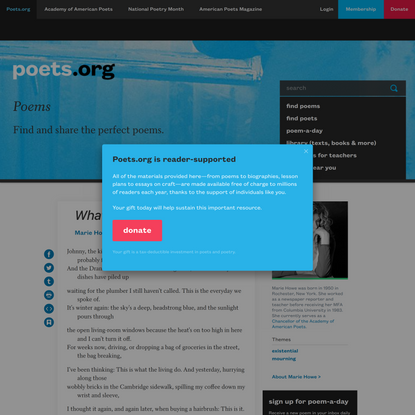 What the Living Do

Something went wrong trying to save https://poets.org/poem/he-said-i-wrote-about-death. 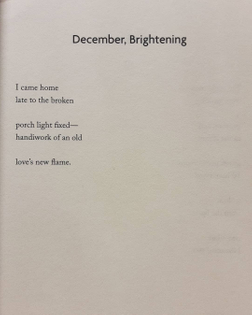 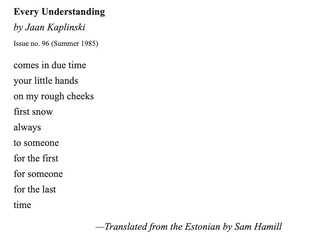 Every Understanding by Jaan Kaplinski

Plea to a Potential Lover
by Laurel Blossom
Issue no. 65 (Spring 1976)

Don’t take me home, at least not yet;
Let’s have another drink, and sit
and talk—I want to be your woman,
but there isn’t any rush.
Let’s take our time,
and think it out.

Lovers surprised by love, like us,
make one mistake: they make too much
of it, want the world
to love them, and believe.
The world believes
in nothing it can’ t touch,

touches what it cannot have,
and loves to death. We’ve been in love,
we’ve passed the rites of marriage
and we know the knife.
You and I
have nothing left to prove.

Let’s keep the secret. On my life
I know a woman’s lovelier than a wife.
I want to be your woman .
and without recourse.
Darling, I love you.
Let’s get a divorce.

Plea to a Potential Lover by Laurel Blo… 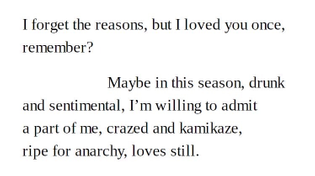 I am just like my mother. I buy books and tell myself that I am buying wisdom and at the end of my life, I own a house full of books. When I was little, I thought that the water came out of the showerhead because it was crying. This is because I heard my mother crying and thought it was the showerhead. from Juvenilia (Yale University Press, 2010)

it is called the future, the branches feathery and lowing in the wind. now call the consequent a painting and why don’t i see you in this painting? now that you are no longer here, a scar floats as a halo above my scalp and when you come back, i grow jealous of your talents. what are my talents? you are so good at being happy, a skill i too practice (or try to practice) and despise. well, don’t worry—i’ve been to the future and seen that scar evaporate into a crown. will you call me in september? the conversation was boring—fat pauses like lakes and i didn’t know what to say. did i want to hang up? no, never. i must have loved you. are questions like relationships? questions have answers, unless they are questions nine or two. what are questions for? one can use a question mark for many things. for example: as a sickle for cutting people’s hearts off. how can you cut someone off with a question? you know, like when i said, “yeah, but we’re still in love with each other, right?” and you told me the answer.

I had left my passport at an inn we stayed at for a night or so whose name I couldn’t remember. This is how it began. The next hotel would not receive me. A beautiful hotel, in an orange grove, with a view of the sea. How casually you accepted the room that would have been ours, and, later, how merrily you stood on the balcony, pelting me with foil-wrapped chocolates. The next day you resumed the journey we would have taken together. The concierge procured an old blanket for me. By day, I sat outside the kitchen. By night, I spread my blanket among the orange trees. Every day was the same, except for the weather. After a time, the staff took pity on me. A busboy would bring me food from the evening meal, the odd potato or bit of lamb. Sometimes a postcard arrived. On the front, glossy landmarks and works of art. Once, a mountain covered in snow. After a month or so there was a postscript: X sends regards. I say a month, but really I had no idea of time. The busboy disappeared. There was a new busboy, then one more, I believe. From time to time, one would join me on my blanket. I loved those days! Each one exactly like its predecessor. There were the stone steps we climbed together and the little town where we breakfasted. Very far away, I could see the cove where we used to swim, but not hear anymore the children calling out to one another, nor hear you anymore, asking me if I would like a cold drink, which I always would. When the postcards stopped, I read the old ones again. I saw myself standing under the balcony in that rain of foil-covered kisses, unable to believe you would abandon me, begging you, of course, though not in words— Advertisements REPORT THIS ADPRIVACY The concierge, I realized, had been standing beside me. Do not be sad, he said. You have begun your own journey, not into the world, like your friend, but into yourself and your memories. As they fall away, perhaps you will attain that enviable emptiness into which all things flow, like the empty cup in the Daodejing— Everything is change, he said, and everything is connected. Also everything returns, but what returns is not what went away. We watched you walk away. Down the stone steps and into the little town. I felt something true had been spoken, and though I would have preferred to have spoken it myself, I was glad at least to have heard it.

2. The Story of the Passport

It came back but you did not come back. It happened as follows: One day an envelope arrived, bearing stamps from a small European republic. This the concierge handed me with an air of great ceremony; I tried to open it in the same spirit. Inside was my passport. There was my face, or what had been my face at some point, deep in the past. But I had parted ways with it, that face smiling with such conviction, filled with all the memories of our travels together and our dreams of other journeys— I threw it into the sea. It sank immediately. Downward, downward, while I continued staring into the empty water. All this time the concierge was watching me. Advertisements REPORT THIS ADPRIVACY Come, he said, taking my arm. And we began to walk around the lake, as was my daily habit. I see, he said, that you no longer wish to resume your former life, to move, that is, in a straight line as time suggests we do, but rather (here he gestured toward the lake) in a circle, which aspires to that stillness at the heart of things, though I prefer to think it also resembles a clock. Here he took out of his pocket the large watch that was always with him. I challenge you, he said, to tell, looking at this, if it is Monday or Tuesday. But if you look at the hand that holds it, you will realize I am not a young man anymore, my hair is silver.  Nor will you be surprised to learn it was once dark, as yours must have been dark, and curly, I would say. Through this recital, we were both watching a group of children playing in the shallows, each body circled by a rubber tube. Red and blue, green and yellow, a rainbow of children splashing in the clear lake. I could hear the clock ticking, presumably alluding to the passage of time while in fact annulling it. You must ask yourself, he said, if you deceive yourself. By which I mean looking at the watch and not the hand holding it. We stood awhile, staring at the lake, each of us thinking our own thoughts. Advertisements REPORT THIS ADPRIVACY But isn’t the life of the philosopher exactly as you describe, I said. Going over the same course, waiting for truth to disclose itself. But you have stopped making things, he said, which is what the philosopher does. Remember when you kept what you called  your travel journal? You used to read it to me, I remember it was filled with stories of every kind, mostly love stories and stories about loss, punctuated with fantastic details such as wouldn’t occur to most of us, and yet hearing them I had a sense I was listening to my own experience but more beautifully related than I could ever have done. I felt you were talking to me or about me though I never left your side. What was it called? A travel diary, I think you said, though I often called it The Denial of Death, after Ernest Becker. And you had an odd name for me, I remember. Concierge, I said. Concierge is what I called you. And before that, you, which is, I believe,  a convention in fiction.”

The Denial of Death by Louise Gluck

There is not one leaf left on that tree
on which a bird sits this Christmas morning,

the sky heavy with snow that never arrives,
the sun itself barely rising. In the overcast

nothingness, it’s easy to feel afraid,
overlooked by something that was meant

to endure. It’s difficult today to think clearly
through pain, some actual,

most imagined; future pain I try lamely
to prepare myself for by turning your voice

over in my mind, or imagining the day
I’ll no longer hug my father, his grip

tentative but desperate all the same.
At the café, a woman describes lilacs

in her garden. She is speaking of spring,
the life after this one. The first thing

to go when I shut the book between us
is the book; silence, its own alphabet,

and still something so dear about it.
It will be spring, I say over and over.

I’ll ask that what I lost not grow back.
I see how winter is forbidding:

it grows the heart by lessening everything else
and demands that we keep trying.

I am trying. But oh, to understand us,
any one of us, and not to grieve?