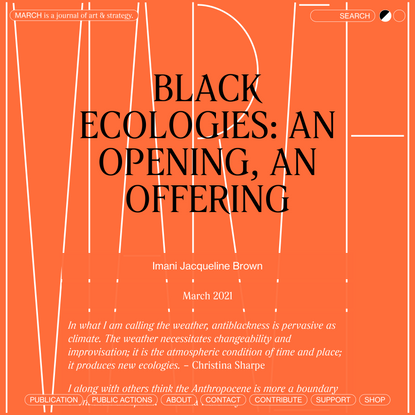 Black Ecologies: an opening, an offerin
1

“The body is a multilingual being. It speaks through its color and it’s temperature, the flush of recognition, the glow of love, the ash of pain, the heat of arousal, the coldness of nonconviction. It speaks through its constant tiny dance, sometimes swaying, sometimes a-jitter, sometimes trembling. It speaks through the leaping of the heart, the falling of the spirit, the pit at the center, and rising hope.
The body remembers, the bones remember, the joints rememeber, even the little finger remembers. Memory is lodged in pictures and feelings in the cells themselves. Like a sponge filled with water, anywhere the flesh is pressed, wrung, even touched lightly, a memory may flow out in a stream.

To confine the beauty and value of the body to anything less than this magnificence is to force the body to live without its rightful spirit, its rightful form, its right to exultation. To be thought ugly or unacceptable because one’s beauty is outside the current fashion is deeply wounding to the natural joy that belongs to the wild nature.”
- Clarissa Pinkola Estés, Women Who Run With the Wolves

We are gliding into disorder, but not necessarily bad disorder. this implies that we will see more periods of calm and stability, with most problems concentrated into a small number of Black Swans.°

Consider the nature of past wars. the twentieth century was not the deadliest (in percentage of the total population), but it brought something new: the beginning of the Extremistan warfare—a small probability of a conflict degenerating into total decimation of the human race, a conflict from which nobody is safe anywhere.

A similar effect is taking place in economic life. I spoke about globalization in Chapter 3; it is here, but it is not all for the good: it creates interlocking fragility, while reducing volatility and giving the appearance of stability. In other words it creates devastating Black Swans. We have never lived before under the threat of a global collapse. Financial institutions have been merging into a small number of very large banks. Almost all banks are now interrelated. So the financial ecology is swelling into gigantic, incestuous, bureaucratic banks (often Gaussianized in their risk measurement)—when one falls, they all fall. The increased concentration among banks seem to have the effect of making financial crises less likely, but when they happen they are more global in scale and hit us very hard. We have moved from a diversified ecology of small banks, with varied lending policies, to a more homogenous framework of [massive] firms that all resemble one another. True, we now have fewer failures, but when they occur . . . I shiver at the thought.‡ I rephrase here: we will have fewer but more severe crises. The rarer the event, the less we know about its odds. It means that we know less and less about the possibility of a crisis.

And we have some idea how such a crisis would happen. A network is an assemblage of elements that are somehow connected to one another by a link; the world’s airports constitute a network, as does the World Wide Web, as do social connections and electricity grids. There is a branch of research called ”network theory” that studies the organization of such networks and the links between their nodes, with such researchers as Duncan Watts, Steven Strogatz, Albert-Laszlo Barabasi, and many more. They all understand Extremistan mathematics and the inadequacy of the Gaussian bell curve. They have uncovered the following property of networks: there is a concentration among a few notes that serve as central connections. Networks have a natural tendency to organize themselves around an extremely concentrated architecture: a few nodes are extremely connected; others barely so. The distribution of these connections has a scalable structure of the kind we will discuss in Chapters 15 and 16. Concentration of this kind is not limited to the Internet; it appears in social life (a small number of people are connected to others), in electricity grids, in communications networks. This seems to make networks more robust: random insults to most parts of the network will not be consequential since they are likely to hit a poorly connected spot. But it also makes networks more vulnerable to Black Swans. Just consider what would happen if there is a problem with a major node. The electricity blackout experienced in the northeastern United States during August 2003, with its consequential mayhem, is a perfect sample of what could take place if one of the big banks went under today.

But banks are in a far worse situation than the Internet. The financial industry has no significant long tail! We would be far better off if there were a different ecology, in which financial institutions went bust on occasion and were rapidly replaced by new ones, thus mirroring the diversity of Internet businesses and the resilience of the Internet economy. Or if there were a long tail of government officials and civil servants coming to reinvigorate bureaucracies. 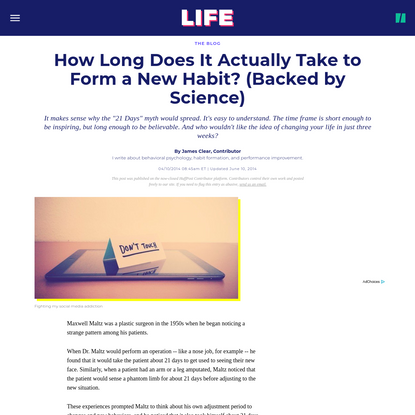 How Long It Really Takes To Form A Habi… 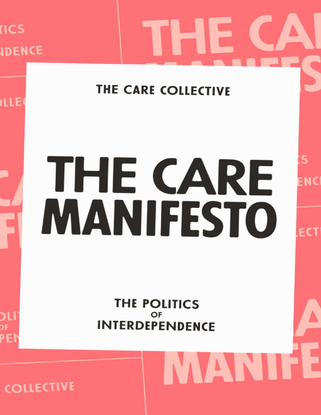 Once one comes to the conclusion that mental health problems are structural, not individual, one must then propose solutions in the same vein. If the problem is that people are stressed because they don’t have enough money, then it follows that wages should be raised and wealth taxed to more equitably distribute profits. If people don’t have enough power in the workplace, perhaps sectoral unions are in order. If people are anxious about paying for health care, perhaps we should have Medicare for All. If people are overworked, perhaps there should be a federal mandate that all workers must receive five weeks of paid vacation, as France has. The purpose of the Covid self-help genre, then, is to quell dissent by way of telling people that they can figure out how to cope all by themselves (or perhaps with their therapist, should they be lucky enough to afford one). It’s incredibly patronizing. 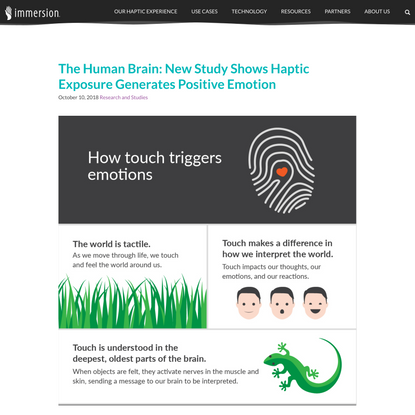