In a recent conversation in Berlin, Silvia Federici listed three trajectories in which the Commons can replace capitalist relations of exploitation and imposed scarcity:
1. (Re-)Appropriation of public spaces and institutions
2. Experiments informed by the principles of Commoning — living new mutual relations, self-emancipating from extractivist logics: other ways of mutual awareness.
3. Building infrastructures that make resistance reproducible.

Self-replacement. Who is ‘we’, who addresses ‘us’, what is beyond ‘this’ body? Rituals on coded surfaces temporarily change our bodies. Avatars and personas then shellter us from impositions of identity, and reciprocally shellter those who address us from an encounter with the messy mollusc of what’s behind the mask — something that may not ‘really’ exist.
Ritual ←→ Address
Hybridity is a space. Cyberfeminist and postcolonial texts propose hybrid figures that transgress boundaries between spheres, fields or categories. Shells grow from anorganic matter on the organic mollusc. Are they animal or mineral? Hybrid spaces such as the locus of the Shell, the mestiza condition, or being a physical-online body are not only an effect of hegemonic processes such as (neo)colonialism and platform capitalism, but also blind spots of their surveillance and policing efforts and sites of chimeric imagination.
Hubris ←→ Control
Mind the Gap. When we imagine imagination, we often think in the terms of what Zoe Sophia calls the Jupiter Space Complex: Jupiter gestated Athena in his mind, birth of a literal brainchild. This, of course, is a patriarchal myth, obscuring the contingency of any thinking that is not mere repetition. Shellstigations center the conditions of imagination instead of the act itself. The 1965 computer program ‘Shell’ embraces this condition as a discontinuity between user (wetware) and system (software), proposing not a mutually intelligible protocol but a program for the user to speak to themself, a site where peculiar languages are invited to emerge beyond the man-machine dichotomy. In a similar vein, to escape reification (the commodification and standardization of everything, a process nurturing perceived powerlessness), Adorno proposes a creative approach that totalizes the particular and unveils ideology through negation. Ideological images tell us what not to imagine, and artistic creation can revert their spell. What happens when we center the site of negation instead of the actor/user/artist? We enter the unimaginable, unmediable realm where mollusc and ocean encounter each other, software and wetware, webserver and website, ghost and Section 9 — the abbys, the chora, the gap wherein a Shell emerges.
Discontinuity ←→ Medium
Sea of Information. Binary codes have an uncanny tendency to write nonbinary bodies. Information leaks; DNA mutates end- and aimlessly into copies; the Glitch spreads like a virus and infects unwitting systems. The ocean has no center and all information is contiguous across the surfaces on which it is written. The Shell’s interconnectedness with all other Shells, its inherent transmediality, invites you to conceive of the site of community practice as total and interconnected, an expanse where interventions ripple and code infringements resonate across all kinds of surfaces. Space is shared space. Center the Outside of protocol, the exception, the taint. The tool is in the container, and the container is leaky.
Leakage ←→ Tool
Always becoming. Barad proposes intra-action to picture the process by which relations and relaters constitue each other. This process can be observed as a relation, as a network of actors (who are rarely all ‘human’), or as a site of intra-action. A Shell heals itself by leaking proteins. It grows indefinitely, never settle (meta-stasis). What does that mean for community practices on the Shell? It invites us to approach our practices of imagination not as a directed action onto the Shell (such as ‘destroying body-images’ or ‘affirming other imaginaries’, neither as a purely relational practice, a ‘constellation’, nor as potential, contingency or site — but as becoming-with the Shells it is situated on, becoming-through relations, and becoming-of the bodies that relate. There is no hierarchy, direction or sequence of these three sides, so it’s futile to instrumentalise one for the other. Center the intra-action, the agency-with.
Healing ←→ Interaction
is/has memory. Memory palaces, shell-plastered memory-boards, spatial file-systems and data tables illustrate how information is constellation, and its place and time is the same physical world where we dwell. Rewriting the past is remembering the futures and vice versa, and these inscriptions are on Shells. To challenge epistemicide, the ongoing killing of knowledges other than that of european expansionism, we need, as Silvia Federici reminds us, build and connect the commons of knowledge and experience and potentiality, of alternative practices, of ways to relate. Shells serve both as element and as canvas in this coming collage, common archive of imaginations.
Constellation ←→ Data

1 & 2
Consider surface and mask instead of situated, transparent, intentional Self
3.
Consider monstrous collective bodies instead of coherent community strategy
4 & 5
Consider contingency instead of origin
6.
Consider healing, reparation and mutual care instead of autonomous actors
7.
Consider how knowledge is meaningful and embodied constellation in decay, and vice versa

Inquiries inspired by the 🐚 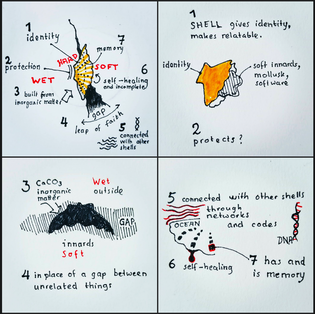 What all SHELLs 🐚 have in Common

Shell as a Figure bears an inherent proximity to the poetry of allegory. In contrast to the Symbol which finds the pure signified within the signifier, an allegory, with its three formants Figure, Meaning and Code, eschews this transcendent gesture for a more sardonic (or ridiculous) one. Here is an attempt to position the method of Shell Research within this realm. 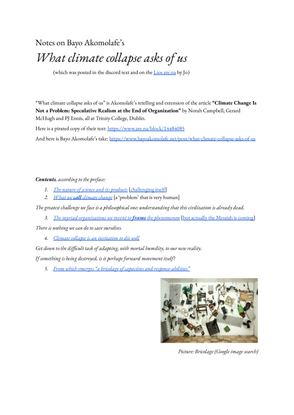