Architectural belief systems and language let us think we are designing for the greater public without any real engagement with that public. We will explore the way that architects talk about the people they design for, especially when those people are not their clients. How do the words we use change our approach to designing?

8 Followers
Collaborators
Elisha Cohen
This channel appears in
Acting and Knowing Together in the World, Modes, the user in architecture, *Sessions, 📖 eDucation, Towns · Buildings · Construction, and Codesign 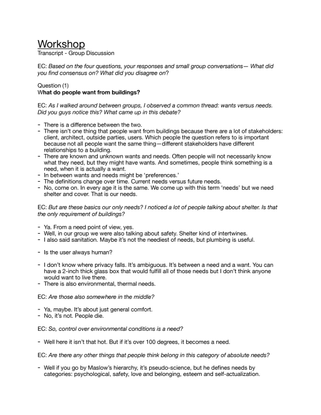 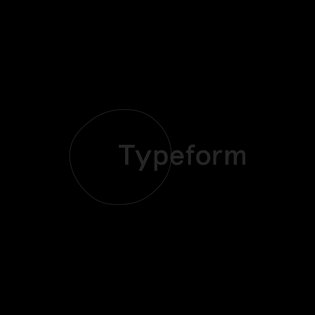 Tell me your thoughts about architectur…

There are no required readings, but please write a few sentences in response to each of the below questions and upload to this channel. Your responses will be the foundation of our discussion. There are no wrong answers, please just write your personal definitions.

(1) What do you believe that people want from buildings?

(2) What do think the relationship between architecture and quality of life is?

(4) What do you think makes a building 'user-friendly'?

1) What do you believe that people want from buildings?
The earliest type of building typology was a cave or a shelter made out of twigs and animal skin or something else that was easily available. People made such structures to keep themselves safe and secure from the harsh conditions that they experiences on the outside. One could argue the actual resilience of of such structures against the unyielding strong winds or the mighty power of a wild animal but the fact remains that these covered dwellings provided a sense of security. People like to feel secure; secure enough to be able to do tasks that are secondary in nature. If a building were to provide mental security without actually being physcially safe people would still chose to stay their over a building with opposite conditions. Theories such as degree of enclosure, refugee and prospect and colour theories spring from this simple concept of feeling safe.

2) What do think the relationship between architecture and quality of life is?
Architecture can play a concious role in improving the quality of life. It has a very direct relationship where an architectural intervention can better or make worse the current quality of life of it's inhabitants. Certain deliberate design decisions such as providing a staircase before the elevator and keeping it visually accessible can make the inhabitants take the stairs more often. Implementation of CEPTED principles in the neighborhood can increase social inclusivity and create a framework of natural surveillance. Works of Frank llyod wright show how the decision of designing his houses as pivots over central hearths and creating a family space increase daily interactions between family members. But as a counter arguements there have been instances where even after applying accurate architectural interventions the outcomes were deemed far from feasable. Like the impementation of garden City principles in cities like New Delhi lead to an increase in economic disparity between housing communities and a hike in the land prices
. Zaha Hadid's Dongdaemun Design Park & Plaza ended up creating a break in the urban fabric. The locals did not like or appreciate it and it became a black hole that noone would enter.

3) How do you define ‘user-needs’?
There are want kinds of user needs
1. What they want
2. What they need
3. What they think they need
It is our job as an architect to create a fine balance between these three needs to create a space that inspires the user, makes them feel safe, excited them to stay there, seems appropriate with the current trends and needs and makes them have a better quality of life

4) What do you think makes a building ‘user-friendly’?
1.Sense of safety
2.Transparency in function, form and expression
3.Ability to project ones emotions onto the elements of the buidling
4.Relatability with the form and visual representation of the building
5. Smart in terms of access to basic facilities v
6.Directionality markers to allow wayfinding without placards
7.Clear heirarchy of spaces
8.Well defined transitions between two spaces

In our times with all access to information, connectivity everyone thinks they are so knowledgeable and aware, users then become either more demanding or more hesitant less trusting in relying on professionals they want something to stand out with. I think the right question though is what direction is on a small scale where is a city going and on a bigger scale what direction is the world aiming for. So much contractions between evolution and regression which by regression I mean going back to our roots. Evolution has shown us we were polluting being inconsiderate of our planet of other 3 rd world countries... Yet we even thought we want to input our concerns to ecology Yet people are still upssed with having the latest technology tools or gadgets, and be up to date trend wise... How do we plan to corroborate those two opposite directions? I believe it to Architects, Landscapers, Urbanistes to direct the new orientation to come. Looking back is regression as well as a possibility to improve the future. In previous civilizations users would hire architects or landscapers with trust giving them the power to choose new directions new organizations for society, with very simple ordonnance, users used to be mainly kings, emperors...or the wealthier group of society and they would want unity in design, same but better then their neighbors. Now days we have traveled so much different trends and schools through out history that it has become hard to really define what isn’t something that already existed. Just as a song that becomes a hit because people heard it so many times that they start liking it knowing the lyrics...as they may not have liked it in the force place. As the perfect body shape is supposed to be how Womens and mans in magazines lookslike. Media, social media manipulate populations by throwing images of what looks beautiful, brains absorbs and sometimes you might surprise yourself liking something you used to hate just because subconsciously by seeing it every where it became beautiful. Do we still want to be sheeps ? Aren’t we well aware enough to know society is throwing us in a well defined mole?

1) What do you believe that people want from buildings? Impossible to generalise

3) How do you define ‘user-needs’? The minimum set of conditional of intersections between the user and the platform to enable the sufficient exchange of information required for the intended functioning of the system

4) What do you think makes a building ‘user-friendly’? The optimal provision of user needs

(1) Does the average person know how to articulate what they want from a building?
> People like to be in spaces that suit their current inner life.
>> that alignment gives rise to a sense of presence, and that presence is what feeds into a sense of place.
>> the current inner life is in flux and historically defined.
>>diectic / semantic meaning is fixed, but denotation/ meaning depends on a time or place.
>>>applies to words and applies to people. "here," "I."

(2) Perhaps the degree of agency for an individual or group to express. The preservation of possibilities / possible futures. And the sacredness of the past.

Adaptible? Flexbile? Easy to misuse
Can a building be a friend?

Quality of life suggests luxury? We always think there's a direct corrolation
- is it design?
- what of the 97% undesigned?

Quality of life indicators?
- architecture is only one of these

'The Missing Tooth'
- people want to be challenged

(4) Awareness or empathy, from architects (> creates hierarchy) and the people behind making possible that buildings