Glitch searches for the unfamiliar while at the same time it tries to de-familiarize the familiar.

How can we implement defamiliarization in graphic design? 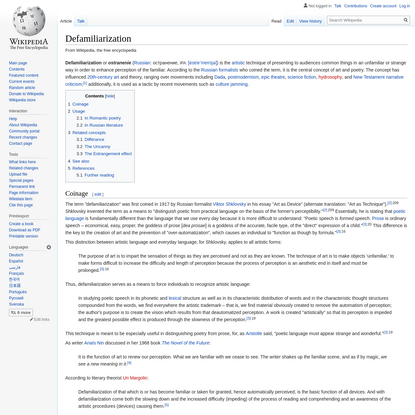 signs and symbols and their use or interpretation

signifier (arbitrary) -- signified -- sign is made up of two parts

words are arbitrary -- the word tree doesn't have any inherent meaning, we know what a tree is by knowing what it isn't, everything that tree is not

binary code - 1 & 0 - if u put in a computer sequence, it's understood when put in a certain order, information/programming happens.

universal underlying structure of how we relate to ''music'' and what grabs an audience, and what works and how to apply that

post-structuralism -- contingency
- you have to have seen an apple to know what an apple isn't, it depends on other things.
- concepts of color- different people have different names for other colors or don't for others

TREE isn't important, if it was - it would universally mean tree - relational differentiation is all that ACTUALLY matters

i feel like these are all things that we already know, but then breaking it all down to concepts hurts my head

THE MEANING OF ANY writing is dependant on societal contingencies, all of our experiences in society are different-- you will interpret art differently bc of that. life experiences

power structures feed into social contingencies -- deconstruction of all of these social hierarchies, looking from gender-- men cis -- each interpretation of things may differ from each individual

rhetoric of the image -- graphic design and advertising and how those images are read
all images, graphic design/advertising, three types of meaning
linguistic -- what are the words that you see -- ((linguinee ? pasta langauge ))

connotated meaning - cultural meaning - beyond what you're literally seeing, what does it connote -- purely based on your societal understanding (super super personal) 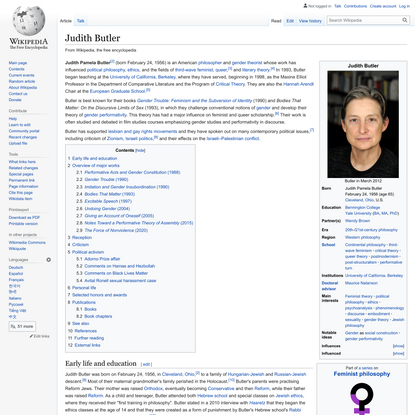 [Excerpt from my book review assignment from Lisa’s Architecture’s Bodies course, since it speaks spatially about the concept of standpoint and orientation] -CD

In Queer Phenomenology, Sara Ahmed takes up the question of “orientation” in phenomenology in order to unpack the ways that “sexual orientation” and the “Orient” inflect how bodies move through space and time. By bringing in dozens of different thinkers from Marx to Judith Butler to Franz Fanon at the same time as reflecting on personal lived experience, by productively disorienting us through “writing [that] takes detours, turns, and moves this way and that”[1], and by masterfully employing metaphor and wordplay, she spatializes sexuality, gender, and race to queer the study of phenomenology. She posits that queerness and disorientation are modes of deviation from unconsciously-followed straight lines of heterosexual norms. Anchored by a table as the object to which she constantly returns to face, Ahmed shows that our bodies have various orientations that register proximity, shape how we occupy space, and dictate what objects we perceive and where our bodies direct energy and movement.

For this assignment, I read Chapter 1, where Ahmed dives into orientations towards objects to set the stage for her later chapters, which build upon this groundwork to spatialize sexual orientation and racialized orientations.

Her strategy of physically orienting a body in space and describing it through spatial prepositions (“in front” or “behind”) and through the spatial framework of the line are direct ways of relating bodies to built form. To be “orientated,” among other things, is to be facing a certain direction, and that means looking from a certain point. Bodies and objects acquire a direction by assuming a point of view as given[2], whether that point of view is the prime meridian (to determine what is East) or the “normalcy” of heterosexuality (to determine how to live life and reproduce families). Because of this directionality, because of a certain orientation in space, bodies then only perceive what is “in front” of them, losing sight of other directions and therefore making some objects unreachable. As we follow one direction, we find ourselves on a straight “line” (line of thought, line of motion, blood line) and following those lines creates who we are. The line is performative, is dependent on repeated norms and conventions and trodden paths, and that repetition is what creates and reconstitutes the line[3]. Ahmed mentions a process of sedimentation, whereby “our body takes the shape of this repetition,”[4] getting stuck particular alignments and positions and orientations – as a small example, Ahmed quotes Charlotte Perkin Gilman’s observation of body-shaping in women and the spaces they inhabited, with more and softer seats placed throughout interiors to accommodate their homebound sitting, and bodies shaped by that sedimentary inhabitation[5]. Lines accumulate as traces on a body or object’s surface, an “external trace of an internal world” or “signs of the past, as well as orientations toward the future”[6].

She writes at length about the field of objects “in front” of the body, but at the same time “behind” the bodies and “behind” the objects are things in the background[7]. When an object is so familiar it disappears into the background, like the table under a piece of writing paper or the domestic world behind the writer’s body, we also cast into invisibility the political economy, the materials, the dependence on forms of (domestic and other) labor which make it possible to be taking the time to write on that table in the first place. That table in the background and the domestic spaces “behind” the writer are used to demonstrate a story of “how things come to matter by taking shape through and in the labor of others”[8]. The work of many bodies is hidden behind objects.

We are pressed into line by various social pressures[9], but we can turn and deviate from those lines in acts of “reorientation”[10] or “disorientation”[11].

When bodies take up space that is not oriented to the body, or space that does not “extend their shape”[12], or bodies use objects out of orientation lines, there is a “reorientation.” An example Ahmed gives is the Kitchen Table Press, an activist feminist press run by lesbians of color, which uses the kitchen table surface, on which women tend to do domestic work, to instead do political work. This usage of the table is a “reorientation device”[13].

Through disorientation, “bodies inhabit spaces that do not extend their shape, or use objects that do not extend their reach”[14]. Disorientation can involve bodies becoming an object, and its effects are unevenly distributed among different raced bodies. White bodies have the privilege of being orientated by default in space that does extend the body. Non-white bodies have failed orientations, feelings of losing one’s place. Disorientation is also “a way of experiencing the pleasures of deviation”[15]. Ahmed speaks about the work of inhabitance and creating familiarity, whereby “orientation is about making the strange familiar through the extension of bodies into space”[16]. Conversely, making the familiar strange or allowing overlooked objects “to dance with renewed life”[17] are forms of disorientation. Disorientation occurs when an orientation fails to keep a body or an object in line[18]. Disorientation counters lines of orientation, allows bodies to see and encounter things that they could not before, and becomes an opportunity for learning and embracing the strange and the oblique. 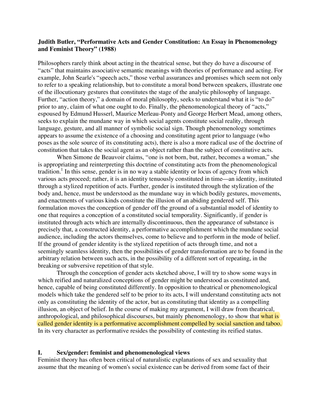 Sometimes it seems like the world we grew up in is categorically distinct from the world we inhabit. But I’m sure Debord would argue that we are merely experiencing an intensification of a process that has been in motion longer than any of us have been alive.

Pre-spectacular society has already passed beyond living memory. Soon we will hit another inflection point - where no one alive even knew someone who lived before the spectacle. All of human history is now before and after; it will soon become literally impossible to understand the inner life and daily reality of pre-modern man - if it’s not already.

Book Review: The Society Of The Spectac…

The spectacle is the acme of ideology, for in its full flower it exposes and manifests … the impoverishment, enslavement and negation of real life.

∆ Guy Debord, Society of the Spectacle

∆ Guy Debord, Society of the Spectacle 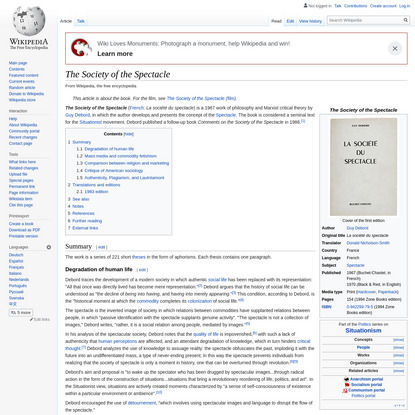