The representation of identities is a field on which art and fashion seem to converge in the common aim of a wider diversity. A new wave of sexual and racial liberation is pervading the contemporary imagination across fashion shows, exhibitions, advertising campaigns and social media channels. In November 2020, on the occasion of a Gucci-branded online festival- Gucci Fest- transgender activist Paul B. Preciado starred in an episode of a web-series signed by film director Gus Vas Sant and the brand's creative director Alessandro Michele. A few months earlier, Judy Chicago designed "The Female Divine" show for Dior, bringing her iconic story as a feminist artist to the runway along with the Spring/Summer Haute Couture collection by Maria Grazia Chiuri. And there are many other collaborations of the Dior designer with feminist artists such as Marinella Senatore and Claire Fontaine. Something similar is happening on the online platform sumb0d1.io/black-lives-matter, a digital showroom that hosts a room dedicated to Black Lives Matter with the participation of artists and designers such as Grace Wales Bonner, Kerby Jean-Raymond, Mowalola Ogunlesi, Kenneth Ize and Idris Balogun. Sumother, the agency behind the project, describes the digital space as follows: The Black Lives Matter room provides a virtual fashion utopia that offers all-access to a showcase of black thought leaders working towards a future free of institutionalised racism.
Is there effectively a place for utopia and liberation within the image market? 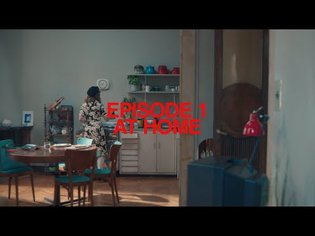 "In this first episode of the seven-part film collaboration between award-winning director Gus Van Sant (Drugstore Cowboy, My Own Private Idaho, Elephant) and Gucci creative director Alessandro Michele, we follow main character Silvia through her eccentric morning routine at home in Rome, including a scene where she throws a dress—from Alessandro Michele's first Gucci women's show Fall Winter 2015—off her balcony, to a song by Billie Eilish. Silvia is seen sifting through her post, which reveal colorful Gucci show invitations, as well as a mysterious flyer, and then she becomes lost in a television lecture performed by writer and philosopher Paul B. Preciado, until the arrival of an unexpected visitor, while a band in another room rehearses a piece of music Kim Gordon wrote for the mini-series." 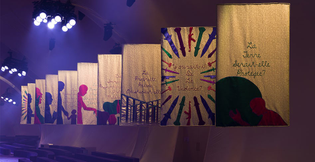 Judy Chicago (Chicago, Illinois, 1939) is a multifaceted artist has never ceased to develop a particular feminine aesthetic, questioning male dominance and celebrating the success of women, who are often forgotten or relegated to second place. To the sharp, angular lines of her contemporaries, she prefers generous, sensual, colourful and suggestive curves, in which spirals and shells evoke the symbols of female power. Judy Chicago has discovered the fundamental role of goddesses in antiquity and in different cultures around the world. Giving women back their divine dimension, letting these inspiring and creative figures bring to light buried parts of history: these are the ideals that have guided her reflections on countless themes, including embroidery, for almost sixty years.

During her collaboration with Maria Grazia Chiuri for Dior, she contributed her profound knowledge of women's history, but also of sewing and textiles. In addition, she has lectured internationally, published fourteen books and co-founded the Feminist Art Program at California State University, Fresno in 1970. This unprecedented initiative continued with painter Miriam Schapiro on the occasion of the Womanhouse exhibition, created by a number of female artists and a group of female students from the prestigious California Institute of the Arts (CalArts), who were encouraged to think beyond conventions and social dictates.

Marinella Senatore's artistic practice is characterised by a strong participatory dimension and a constant dialogue between history, popular culture and social structures. Her works involve entire communities around social themes and urban issues such as emancipation and equality, aggregation systems and workers' conditions. In 2013 he founded the School of Narrative Dance, a multidisciplinary, nomadic and free school based on an idea of participatory and anti-hierarchical education.

For the Dior fashion show, he contributed to the conception and creation of the set design that framed the Cruise 2021 collection. The artist wanted to celebrate the tradition of public illuminations deeply rooted in the south of Italy by covering the facades of the monuments facing the Cathedral square in Lecce with 1.5 km of flexible LED tube. 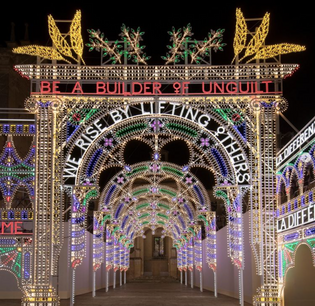 The prism of feminism is an essential and omnipresent theme in the work of the Claire Fontaine collective, so much so that it has come to be defined as a lifestyle. Fascinating for their paradoxical ambivalence and the power of their parable, Claire Fontaine's works articulate messages that challenge us, between intimations and calls for reflection.

For Dior, Claire Fontaine created a neon or LED installation and covers the catwalk with newsprint - a reference to one of her previous installations, Newsfloor - which creates a "visual noise", an authentic artistic dialogue between feminist art and creation in all its forms.
Between disturbance and fascination, the play of light conveys singular energies and emotions, giving materiality to words, making them interact with the outside world, thus changing the reading of the reality that surrounds them. 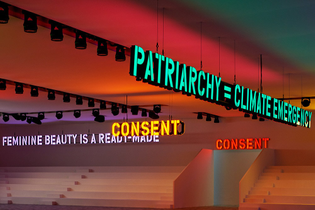